Elda Vey was born June 4, 1926 in Colfax Township, rural Wellsburg, daughter of Asa and Dena (Kruse) Slifer. She attended rural school in Grundy County then graduated from Grundy Center High School in 1944. Elda Vey taught school in rural Grundy County for three years and was married to Calvin Riebkes in 1946. They later divorced and on September 22, 1961 she was united in marriage to Willard Riekena in Austin, Minnesota. Elda Vey and Willard made their home in Hampton, Iowa where she worked as a Nurses Aid for fifteen years at the Franklin General Hospital and the Hampton Care Center. She had also operated a café in Hampton for a short time. She returned to Grundy Center in 1995 and has spent the last few years at the Grundy County Memorial Hospital Long Term Care Unit. She was a member of Colfax Center Presbyterian Church and the AMVETS Auxiliary. She enjoyed crocheting, fishing, cooking and canning when she was able, and more recently participating in the activities at Long Term Care and spending time with her family.

She was preceded in death by her husband, Willard on August 14, 2000; her parents, Asa and Dena; brothers, Ivan and Rollie Slifer; and by one nephew. 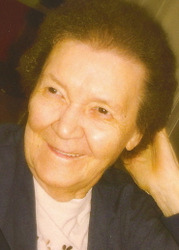