Helen was born August 14, 1907 on the family farm in Grant Township in Grundy County, Iowa, the daughter of Helmer H. and Jennie (Pabst) DeBerg.

Helen was united in marriage to J. John (Jack) Kinsinger in Grundy Center on September 4, 1929. They farmed until 1962, they then moved to Independence, Iowa where they both worked at the Mental Health Hospital where they worked as Psychiatric Aides for 6 years. Jack passed away July 24, 1968 and Helen then moved to Reinbeck, Iowa. She lived there for 18 years and worked as an Aide at Parkview Manor. Helen bought a home in Grundy Center and moved there November 1, 1984. Helen loved lots of flowers and her roses were her pride and joy.

She is survived by a sister-in-law Catherine DeBerg of Grundy Center, Iowa and numerous nieces and nephews.

She was preceded in death by her parents, husband: Jack; 5 brothers: John Chris, Joe and Elmer and one in infancy; and 4 sisters: Lena Stumberg, Ellen DeBerg, Tena Hummel, and Martha Ostendorf. 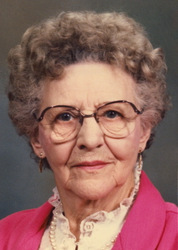