Mary Lou was born April 4, 1928, in Morgantown, West Virginia, the daughter of Charles Harold and Lorea Elgie (Boyer) Hughes. At a young age the family moved to Biggsville, Illinois. Mary Lou graduated from Biggsville High School in 1946. She attended Western Illinois State Teachers College for 2 years and graduated from the University of Iowa. Mary Lou taught school in Grundy Center for 5 years and would later be a substitute teacher for several years.

On August 8, 1954 she was united in marriage to Gerald Glenn Strickler in Biggsville, Illinois. The couple lived south of Grundy Center for 10 years. They then moved to their present home. Mary Lou moved to the Grundy County Memorial Hospital Long Term Care Unit in January 2009. Mary Lou was an active member of the First Baptist Church in Grundy Center, were she served on various committees and in various offices. She also was a long time Sunday school teacher.

She is survived by her husband: Gerald; son: David and his wife Janie Strickler of Grundy Center, Iowa; 4 grandchildren: Justin, Chase, Alexa, and Logan; and a sister: Barbara Maxwell, of Naperville, Illinois.

Preceding her in death were her parents; a brother-in-law: Henry Maxwell. 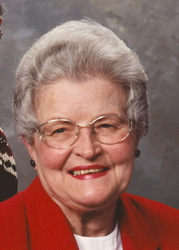