Lillian L. Meester, 92, formerly of Wellsburg, Iowa was carried peacefully into glory in the arms of her Savior, Jesus, on Sunday, March 7, 2010 while residing at Oakwood Care Center in Clear Lake, Iowa. Following private burial in Shiloh Cemetery in Wellsburg, memorial services will be at 11:00 am on Thursday, March 11, 2010 at the United Reformed Church in Wellsburg with Reverend Mathew Nuiver officiating. Visitation will be on Wednesday from 5 pm to 7 pm at Doyen-Abels Funeral Home in Wellsburg.

Lillian L. Schultz was born on January 14, 1918 on a farm near Ackley, Iowa, the daughter of Louie and Hattie (Willems) Schultz. She attended country school through the eighth grade then rode a horse 6 miles to Ackley High School where she graduated in 1936. She met the love of her life, John J. Meester on a blind date and they married on February 23, 1939. They had two daughters, Judy and Sharee. They farmed near Wellsburg until Johns death on August 10, 1965.

Lillian moved to town in March, 1967 and was a nurses aid at the Ackley Presbyterian Home for fifteen years. On February 5, 1970 she married a dear man, Herman P. Ruter. They enjoyed traveling and fishing trips together. Herman passed away on October 12, 1972.

Lillian made her profession of faith in Jesus Christ at the Second Christian Reformed Church of Wellsburg in 1944. She was a faithful member serving as a Sunday school teacher and holding various offices in the Helping Hands Society and the Willing Workers Society.

When she was 17, Lillian won a blue ribbon for a quilt at the Iowa State Fair. She had a life long love of sewing and hand work, making most of her girls clothes as they grew up. She developed her skills in needlepoint, cross-stitch, hardanger and more quilting. She served on the Wellsburg Library Board and attended many Stonecroft Bible studies. Flower gardening and card and game playing were favorites. Her daughters pantries and freezers were filled with her home canned and frozen produce. Grandchildren and great grandchildren were her delight.

Lillian was preceded in death by her parents; an infant son, Gerus Ray; both husbands; a three-year-old sister, Lillian; and brother, Raymond Schultz.

Memorials may be made to Holt Childrens Services, Hospice of North Iowa, or the Clear Lake Ambulance Service. 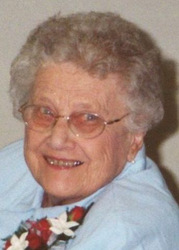