Leona C. Grote was born on March 15, 1912 in Bowling Green, MO, daughter of Theodore and Elizabeth Grote. She was raised in the Bowling Green area and helped her parents care for the younger siblings. Leona moved to St. Louis, MO where she worked as a maid for a prominent family for over 12 years.

Leona had known Edward Korte from Bowling Green, and they met up again when Edward and friends would visit St. Louis. Leona and Ed were united in marriage on June 28, 1940 in St. Clements, MO. Together, they made their home in Bowling Green where Leona worked as a seamstress. In 1957, the family moved to Lincoln, IA. Leona continued to work various jobs as well as being a seamstress. In 1964, Leona and Ed moved into Morrison, IA to retire. Ed died on April 28, 1998.

Leona enjoyed reading, flower gardening and watching the Gaithers on TV. She especially enjoyed watching comedies on the BBC and bird watching around her home in Morrison. Leona loved to visit with everyone who would stop by, and she was always concerned how they were doing. She had a special love of her family and most especially her grandchildren. 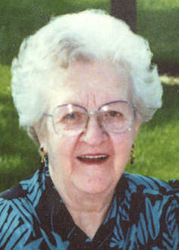