Albert D. Huisman, 95, of Wellsburg, Iowa, died Thursday, September 8, 2005, at Presbyterian Village in Ackley, Iowa. Funeral services will be at 10:30 AM, Monday, September 12 at the Wellsburg Reformed Church in Wellsburg, Iowa, with Pastor Betsy Piette of the Pleasant Valley United Methodist Church in Wellsburg officiating. Burial will follow at Wellsburg Reformed Church Cemetery. Visitation is from 4:00 to 8:00 PM on Sunday at Doyen-Abels Funeral Home in Wellsburg. Memorials may be directed to the family.

Albert was born March 9, 1910 on the home farm in rural Grundy County, Iowa, the son of Dick and Tatjie (Ross) Huisman. On April 9, 1936 he was united in marriage to Minnie DeVries at the Pleasant Valley Reformed Church Parsonage in rural Holland, Iowa. Minnie passed away on June 9, 1978. On June 5, 1982 he married Irene Hunt at the First Presbyterian Church in Jackson, Minnesota. She passed away on October 23, 2002. Albert farmed north of Wellsburg for many years retiring in 1966. He moved to town in 1967. After retiring Albert helped his son at H&H Implement. He also was an agent for Grundy Mutual Insurance for many years.

He was a member of the Pleasant Valley United Methodist Church in rural Wellsburg, where he served as the church Secretary and Treasurer for many years. He enjoyed visiting with people, gardening, fishing, and hunting.

He was preceded in death by his parents, his wife Minnie, and his wife Irene, and 4 brothers Bill, Jerry, Henry and Dick Huisman. 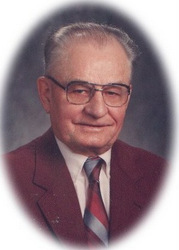