Nettie Huisman, 93, of Wellsburg, Iowa, died Saturday, June 24, 2006, at the Presbyterian Village in Ackley, Iowa. Funeral services will be 1:30 P.M., Tuesday, June 27, 2006, at St. Paul Lutheran Church, rural Wellsburg, Iowa, with Intern Pastor Joel Baranko officiating. Burial will follow at the church cemetery. Visitation will be Monday, June 26, 2006, from 6:00 P.M. to 8:00 P.M. at Doyen-Abels Funeral Home in Wellsburg, and also Tuesday morning from 9:00 A.M. to 11:00 A.M. at the funeral home. The family will be present on Monday evening to greet friends. Memorials may be directed to St. Paul Lutheran Church.

Nettie was born June 7, 1913, at home on the farm in rural Wellsburg, Iowa, the daughter of Dick and Malena (Molendorp) Weichers. She attended rural Wellsburg country school. On January 9, 1934, Nettie was united in marriage to Dick D. Huisman at the Lincoln Center Christian Reformed Church parsonage, rural Grundy Center, Iowa. Nettie lived all of her married life in Wellsburg, and continued making it her home after her husband Dick died on February 28, 1999. Nettie moved to the Presbyterian Village in Ackley in 2000.

Nettie was a member of St. Paul Lutheran Church, rural Wellsburg, where she had been active in the Lutheran Church Women. She was an excellent seamstress and quilter. 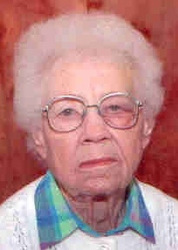