Following cremation, Memorial services will be 2:00 P.M., Saturday, May 13, 2006, at the Wellsburg Reformed Church in Wellsburg, with Pastor Todd Rempe officiating. Visitation will be Friday, May 12, 2006, from 5:00 P.M. to 8:00 P.M., at Doyen-Abels Funeral Home in Wellsburg, where the family will be present to greet friends. Private family burial will occur at a later date at Shiloh Cemetery in Wellsburg. A memorial fund has been established.

Jane was born January 29, 1922, in Gladbrook, Iowa, the daughter of Edward and Edna (Ladehoff) Staker. Jane was raised in the Gladbrook and Garwin area, graduating from Garwin High School in 1939. On September 27, 1941, Jane was united in marriage to William K. Kienzle in Iowa City, Iowa. They were later divorced. On February 21, 1962, Jane was united in marriage to Lewis "Luby" Ackerman in Grundy Center. He died on June 14, 1966. On June 26, 1970, Jane wed Henry Maas in Wellsburg. Henry died on June 4, 1981. Jane lived in Wellsburg since 1947. While in Wellsburg, she enjoyed the part-time restaurant work that she did at local businesses. She also liked spending time bowling and golfing. Jane enjoyed visiting friends, and spent much time visiting the homebound and those that were residents in local nursing homes. Jane was a member of the Wellsburg Reformed Church, and had been an active member of the Women's Group at church.

She is survived by one son William E. Kienzle and his wife Alice of Oroville, California; four daughters Mary Gast and her husband Roger of Geneva, Iowa; Sandra Trampe and her husband Bill of Steamboat Rock, Iowa; Joan Moore and her husband Greg of Fort Madison, Iowa; Miekka Farmer of Hubbard, Iowa; twelve grandchildren and sixteen great-grandchildren.

She was preceded in death by her parents, two husbands Lewis "Luby" Ackerman and Henry Maas; and two sons Michael Kienzle in infancy and Steven Kienzle. 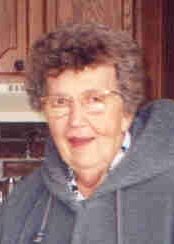