Margaret was born November 22, 1914, the daughter of Joe and Lena (DeBerg) Stumberg. She was born and raised in rural Dike and graduated from Dike High School. On January 11, 1937, Margaret was united in marriage to Ross Lyle Lynch in Cedar Rapids, Iowa. They farmed near Beaman until Ross's death on October 11, 1956. Margaret married Dale Clapsaddle on August 14, 1962 in LuVerne, Minnesota. Dale died May 24, 1999. Margaret moved to Conrad in 1962 and lived there until moving to Arlington Place in 2004 and then to the Grundy Care Center in 2005. She worked in her home most of her life. She loved crocheting, embroidering, knitting, cooking, baking, working in her garden and singing. Margaret loved attending to her grandchildren's sporting events. But most of all she enjoyed spending time with her family and friends. Margaret was a member of Bethany Presbyterian Church, Conrad Women's Club, Eastern Star and Tuesday Musical Club.

She was preceded in death by her parents; husbands, Ross Lynch, Dale Clapsaddle and two sisters, Laverne and Lois. 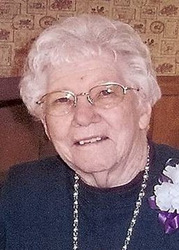