Lenora Sager was born August 25, 1912 in Gladbrook, Iowa, the daughter of Howard and Anna (Schmidt) Hoeg. She received her education in the Shell Rock schools. On December 5, 1935, Lenora was united in marriage to Nelson C. Sager in Hammond, Illinois. After their marriage, they made their home in Reinbeck. Lenora worked for Wilson Packing plant for 10 years, and then stayed at home to care of her family. Her husband Nelson died on May 2, 1996, and Lenora continued to make Reinbeck her home.

Lenora was an active member of St. John's Lutheran Church in Reinbeck.

She was preceded in death by her parents; her husband, Nelson; five brothers; two sisters; one grandson and one great granddaughter. 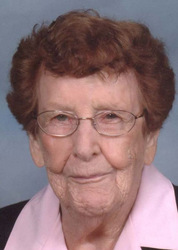