Gladys was born December 16, 1917 on the family farm near Steamboat Rock, daughter of Reibke and Effie Freese. She attended country school and on February 18, 1938 Gladys was united in marriage to Ben H. VanLengen in Parkersburg, Iowa. They farmed near Steamboat Rock and Gladys remained busy raising their family of seven children, helping with the farm chores and milking cows. Gladys and Ben moved into Steamboat Rock in the mid 1980s and Ben died on March 31, 1989.

She was a member of the First Presbyterian Church of Steamboat Rock and her hobbies included quilting, collecting lighthouses, gardening, and watching the birds.

She was preceded in death by her parents; by her husband, Ben; son, Eugene; great granddaughter, Justice Berends; and by 8 brothers and sisters. 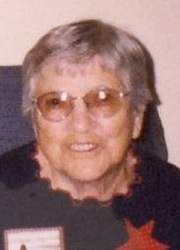