LaVerne G. Tack, 90, of Wellsburg, Iowa, died Sunday, September 28, 2008, at the Grundy Care Center in Grundy Center. Funeral services will be 1:30 P.M., Wednesday, October 1, 2008, at Wellsburg Reformed Church in Wellsburg, with Pastor Todd Rempe officiating. Burial will follow at the Wellsburg Reformed Church Cemetery in Wellsburg. Visitation will be Tuesday, September 30, 2008, from 5:00 P.M. to 8:00 P.M., and on Wednesday, from 9:00 A.M. to 11:00 A.M. at Doyen-Abels Funeral Home in Wellsburg. The family will be present on Tuesday evening to greet friends. A memorial fund has been established.

LaVerne Grace (Lutterman) Tack, was born on August 10, 1918, on the family farm in Shiloh Township, rural Grundy County, Iowa. She was the daughter of John and Tillie (De Buhr) Lutterman. LaVerne grew up on the family farm south of Wellsburg and attended Wellsburg Public School. She graduated from Wellsburg High School in 1936. On September 30, 1938, LaVerne was united in marriage to Dale Tack at the Little Brown Church in Nashua. Following their marriage they lived on several farms around Wellsburg and Holland. They moved to Wellsburg in 1975. Her husband Dale passed away on September 3, 1978, and she continued to make Wellsburg her home. LaVerne was a member of the Wellsburg Reformed Church. She loved to play cards and enjoyed reading.

She was preceded in death by her parents; her husband Dale; two brothers, George and Jerry Lutterman; one brother in infancy; one sister, Tina Molendorp; and one niece, Lois Muir. 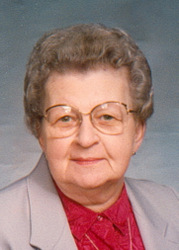