W. Dwight Stone born February 12, 1919 same date as his father in Donaldson, MN, Kittson County, MN. He was the only son of Bill and Olga Stone. He attended 2 years of High School in Stephan, MN, Marshall County, and 2 years in Lake Bronson, MN, Kittson County, MN. After high school he attended Itasca Jr. College in Coleraine, MN  now located in Grand Rapids, MN in 1939 he attended Aakers Business College in Grand Forks, ND in 1941 he worked for Robertson Lumber Co. in east Grand Forks, ND. In 1942 he moved to Minneapolis where he was employed by NSP. He married Lorraine Anderson on Nov. 19, 1945. He retired in 1988 after 46 years. After he retired he volunteered at SCORE  Service Corp. Of Retired Executives. He did this volunteer work for 15 years until poor health forced him to again retire. He was a member of Romeos along with Bill Huntington, Bob Frugner, Charles Engh Jay OHara and a man named Bill and Marty Romero." During his tenure at NSP he was active in the Minneapolis Jr. Chamber of Commerce, Senior Chamber, Down Council, Minneapolis Orchestra and Tree of Lights of the Salvation Army.

He is survived by friends and many acquaintances.

His wife: Lorraine, parents, and sister, Adell, preceded him in death. 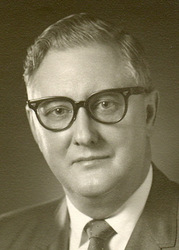