Bernice D. Beenken, 72, of Morrison, Iowa, died Wednesday, May 28, 2008, at Covenant Medical Center in Waterloo, Iowa. Funeral services will be
10:30 A.M., Monday, June 2, 2008, at the Union Congregational United Church of Christ in Reinbeck, with Reverend Joel Love officiating. Burial will follow at Washington Township Cemetery, rural Morrison, Iowa. Visitation will be Sunday, June 1, 2008, from 2:00 P.M. to 7:00 P.M., with the family present to greet friends from 5:00 P.M. to 7:00 P.M. A memorial fund has been established.

Bernice Delaine Eckhoff Beenken was born August 19, 1935, in Iowa City, Iowa, the daughter of Joe and Kate (Miller) Eckhoff. On December 23, 1956, Bernice was united in marriage to Gerhard L. "George" Beenken at the United Church of Christ parsonage in Reinbeck. After their marriage, the couple made their home in Morrison. Bernice was a homemaker. Her husband George died on July 15, 2003. Bernice was a wonderful cook who was famous for her bread and butter pickles and maid rites. She loved to garden and also loved to play cards and bingo.

She was preceded in death by her parents; and her husband in 2003. 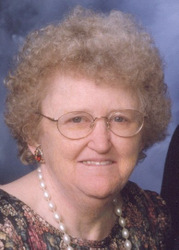