Dorothy Ethel Miller was born at home on a farm west of Grundy Center on August 19, 1913, the daughter of Carrie Ethel (Plager) and William D. Miller. She attended rural school at Palermo #3 and graduated from the Grundy Center High School in 1931, taking the normal training course for teachers. She taught in rural schools for five years, at Palermo #8 and Melrose #3.

On May 29, 1936 she was married at her parent's home to Francis E. Winslow, Grundy Center. Together they farmed the 240-acre family farm one mile south of Grundy. Two daughters, Francene and Carolyn, were born to them. Dorothy was a 4-H member and a 4-H club leader for 25 years. She was active in the Grundy County Farm Bureau, sang in the county women's chorus, and was a member of the ISU Extension Service County Council. She was a life-long member of the United Methodist Church in Grundy Center, served as president of the Women's Society, was a Sunday school teacher, a church officer, and served wherever she was needed. In 1982 she was honored as Woman of the Year by the church. As an active participant in the community she was a member of the Federated Women's Club of Grundy Center. She and Francis were active in supporting the schools and in encouraging young people to get an education. They hosted Rotary Club and IFYE exchange students from France, Ireland, and Austria, as well as opening their home to many visitors through the Extension Service. They especially enjoyed the young people who helped on the farm in the summer. Dorothy often fed them homemade cookies and milk shakes at afternoon lunch breaks. In 1963 they, in cooperation with the local Jaycees, hosted the WMT Mechanical Corn Picking Contest on their farm. That day Dorothy cooked the dinner when the family hosted Governor Harold Hughes for a meal. Their home was often open to mealtime or overnight guests. Dorothy and Francis developed a purebred Holstein dairy herd, Dorcis Holstein Farm, and exhibited cattle at various regional and state shows. In 1967 they dispersed the dairy herd and began their Pioneer Seed Corn sales business. Dorothy was known for the "Pioneer Day" brownies she baked for their open houses. After retiring from active farming in 1980, they traveled and spent 15 years wintering in Arizona. In 1995 their farm was named an Iowa Century Farm. They moved to Friendship Village in 1998. Francis died in April, 2004, ending their loving marriage of nearly 68 years. Over the years Dorothy took great joy in sewing and decorating 125 red velveteen Christmas stockings for family members, babies, exchange students, and friends. She loved the farm and enjoyed feeding the birds and identifying wild flowers. She and Francis planted many trees and made soil conservation a priority on their farm. Dorothy enjoyed children and after her own children were grown, she and Francis often took other young people to events. Her eight grandchildren and 14 great-grandchildren brought her much happiness these past years. Her willingness to help others and her cheerful outlook on life was an inspiration to others.

She was preceded in death by her parents, her husband, Francis; a sister, Alice Miller; a brother, John Miller, three sisters-in-law, Reba Hartz, Helen Crouse, and Mildred Winslow; a son-in-law, Loren Miller; a grandson, David Miller, and a great-granddaughter, Patricia Gold. 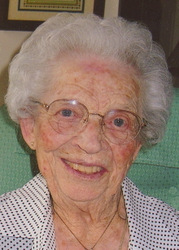