Isabel P. Ammann, 88, of Grundy Center, Iowa, formerly of Wellsburg, Iowa and Port Charlotte, Florida, died from natural causes on Saturday, May 24, 2008 at the Grundy County Memorial Hospital Long Term Care Unit in Grundy Center, Iowa. Following cremation, memorial services will be held at 1:30 pm on Wednesday, May 28, 2008 at the United Reformed Church in Wellsburg with Pastor Harold Miller officiating. Burial will follow in Shiloh Cemetery in Wellsburg. Doyen-Abels Funeral Home in Wellsburg is in charge of the arrangements.

Isabel was born October 15, 1919 in rural Wellsburg, daughter of John H. and Lillie L. (Fricken) Lindaman. She graduated from Wellsburg High School in 1936 then attended Broadlawns School of Nursing in Des Moines becoming certified as a Registered Nurse.

On August 17, 1940 she was united in marriage to Edward W. Ammann in Wellsburg and resided there until moving to Florida in the late 1970s. Isabel returned to Iowa in 2004 moving into Arlington Place of Grundy Center. She has lived at the Grundy County Memorial Hospital Long Term Care Unit for the past year. She was a former member of the 2nd Christian Reformed Church of Wellsburg which is now the United Reformed Church, and more recently a member of 1st Presbyterian Church of Port Charlotte, Florida. She had worked as a private duty nurse and was involved in the early years of the Wellsburg Library. She enjoyed reading, golfing, and doing needle-work.

She was preceded in death by her husband, Edward on March 24, 1998; her parents; and brother Arnold Lindaman. 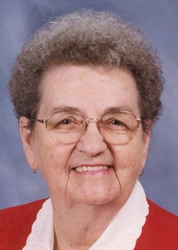