Lyle was born June 28, 1919, at the family home in Melrose Township, rural Grundy County, the son of Linn and Hazel (Sword) Doak. Lyle was raised on the farm and received his education at Melrose #6 country school near his home. He entered the Army in June of 1942 and returned home September of 1945. While serving his country overseas he served with the 2nd Armored Division and saw action in Africa, England, France, Holland, Belgium and Germany. He was a chauffeur and radio operator of a quarter ton truck for General Harmon Hinds.

On December 22, 1945, Lyle was united in marriage to Marcella Meyer at Colfax Center Presbyterian Church. He farmed with his dad for 3 years and in 1952 he farmed the Cemetery Association farm for 29 years. In 1981 he retired and moved to acreage 3 miles west of Grundy Center. After his retirement he enjoyed bowling and gardening. Lyle served on the Elevator Board, Cemetery Board, was lifetime member of the American Legion Post #349 and Amvet Post #17 and a member of the United Methodist Church in Grundy Center.

He was preceded in death by his parents; brother, Irvin Dale Doak; and one infant sister. 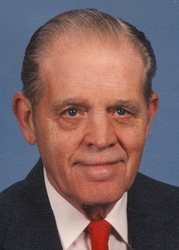