Katherine V. "Kay" Haskin, 79, of Eldora, died of natural causes on Sunday, February 24, 2008 at the Marshalltown Medical and Surgical Center in Marshalltown. Funeral services will be at 1:30 pm on Thursday, February 28 at the Eldora United Methodist Church in Eldora with Pastor Richard Boatman officiating. Burial will follow at Benson Cemetery near Whitten, Iowa. Visitation is from 6 pm to 8 pm on Wednesday at Creps-Abels Funeral Home of Eldora.

Kay was born July 24, 1928 in Bangor, Iowa, daughter of Donald D. and Mildred L. (Long) Weaver. She graduated from Whitten High School then attended Pitzie's Beauty School in Waterloo. On March 10, 1951 Kay was united in marriage to Donald D. Haskin at her parent's home in Whitten. They farmed near Buckingham, Iowa for five years before moving to Eldora in 1959 where they continued to farm. She worked as a dental assistant in Marshalltown for several years at the office of Dr. Blaha, and in the late 1960s worked at Valley View Nursing and Rehab Center in Eldora as a beautician, and later in their kitchen, retiring in the early 1990s. She was a member of the Eldora United Methodist Church, and former member of the Eldora Hospital Auxiliary and Benson Cemetery Society. She bowled in the Eldora Ladies League and the Iowa State Bowling Tournament for many years and also enjoyed playing "500".

She was preceded in death by her husband, Donald on August 12, 2000; her parents; brother, Bernard "Buck" Weaver; and sister, Betty Kelly. 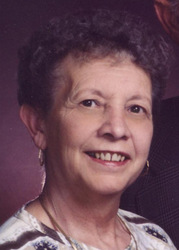