Troy E. Hunt, 89, of Wellsburg, died April 16, 2008, at Grundy County Memorial Hospital-Long Term Care Unit in Grundy Center. Memorial services will be 10 a.m. Saturday at Doyen  Abels Funeral Home in Wellsburg, with Pastor Helmer Peterson officiating. Burial will follow in the cemetery in Marion, Ky., at a later date. Visitation will be one hour prior to Memorial Service at the funeral home. Memorials may be directed to the family. For condolences, please visit the funeral home's website. He is survived by two step-daughters, Nancy (Paul) Elliott of Aplington and Betty (Ed) Olthoff of Cedar Falls; a step-son, William (Linda) Cartwright of Shertz, Texas; nine grandchildren; 18 great grandchildren; and one great-great-grandson.
DOYEN~ABELS FUNERAL HOME is caring for the family and the arrangements.

Troy Eugene Hunt was born September 19, 1918, in Marion Kentucky, the son of Josiah Johnson Hunt and Lucy J. (Hughes) Hunt. He attended country school. He served his country in the Army during WWII in the European Theater in the 83rd Infantry Division. After the war he went to work farming with his brother Ezra. Then he worked for a farmer near Hudson, Iowa. In 1973 he went to work for Ritchie Manufacturing in Conrad, Iowa. While working in Conrad he met Adeline Cartwright, and on May 24, 1975 they were united in marriage in Liscomb, Iowa. He retired in 1984. In October 2004 Troy moved to the Grundy County Memorial Hospital Long Term Care Unit where he developed another family.

He is survived by two step-daughters: Nancy and husband Paul Elliott of Aplington, Iowa, and Betty and husband Ed Olthoff of Cedar Falls, Iowa; a step-son: William and wife Linda Cartwright of Shertz, Texas; 9 grandchildren 18 great grandchildren and 1 great great grandson, along with numerous nieces and nephews.

He was preceded in death by his parents; his wife: Adeline; 3 brothers: Ezra, Hillis, and Vernon; 4 sisters: Myrtle Guess, Pearl Hutcherson, Eula Cannon and Geneva Belt. 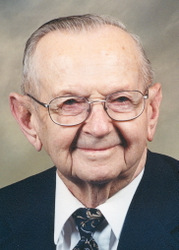