WELLSBURG - Harold Weichers, 87, of Wellsburg died at his home from natural causes while under the care of Cedar Valley Hospice on Friday, Nov. 5, 2004. Funeral services were Monday, Nov. 8, at St. John Lutheran Church in Wellsburg with the Rev. Bruce Zimmerman officiating. Burial followed at the Wellsburg Reformed Cemetery. Memorials may be directed to the family.

Harold was born Jan. 28, 1917, in Shiloh Township, the son of Dick and Malena (Molendorp) Weichers. He attended country school in rural Wellsburg. On Jan. 15, 1941, he was united in marriage to Lillie Eygabroad in Marshalltown. Harold was a World War II veteran serving with the U.S. Army Air Corps. He lived in the Wellsburg area his entire life and was self-employed, operating a trucking and corn shelling business. He was a horse enthusiast and enjoyed attending horse shows.

Doyen-Abels Funeral Home in Wellsburg was in charge of the arrangements. 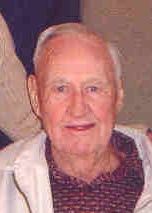