ARSCOTT THOMAS. Among the British-American citizens who have done good work in the cultivation and development of Washington Township, Grundy County, we may well mention the gentleman whose name is presented above. Mr. Thomas was born in the year 1824, in Devonshire, England. His parents, James and Anna (Littlejohns) Thomas, were natives of that country, the father having been born in Coopberry, and the mother in Howell Parish. The father followed the occupation of a farmer, but was never very successful, and at an early age our subject was obliged to hoe his own row. Seven children were born to Mr. and Mrs. Thomas: Robert, William, Arscott, Elizabeth, two who died in youth, and one whose name is unknown. Both parents were members of the Methodist Episcopal Church and both died in the Old Country.

Arscott Thomas was reared in his native country and never attended school after his eighth birthday, owing to the fact that his parents were too poor to support him, and he was obliged to earn his own livelihood at an early age. He worked on farms for strangers and was never at home more than a week at a time after he began for himself. He continued to work for other people until twenty-five years of age, and in the meantime he was married in England to Miss Frances Gilbert, who bore him two children, Betsey A., and Hattie, now Mrs. D. Stephens, of Illinois. After his marriage, our subject decided to try his fortune in the United States and sold nearly everything he owned to get sufficient means to bring him over. He is the only one of his fathers family now living, and the only one who came to America.

When he reached this country, about three hundred miles east of Quebec, Mr. Thomas had but ten English shillings and two pence, and was helped to get his family to Cleveland, Ohio. He was $32 in debt when he reached that city, and there his wife and eldest child died. He had but five cents in silver in United States money, and that he spent to buy a quart of milk for his child. He worked on a farm near Cleveland until about 1851, when he went to Stephenson County, Ill., and there bought forty acres of prairie land, having saved about $400 after paying off his indebtedness. This land is where Florence Station now stands. He built a shanty 12x14 feet, and during the first four months of his residence there he did not see a living thing except wild animals. He began immediately to break the prairie and make improvements, and one summer, while alone, was sick with fever and ague.

A few years later, Mr. Thomas traded his land for one hundred and sixty acres in Minnesota and received $600 in money for his personal property. The land in Minnesota he kept for fourteen years, paying taxes on it, and then sold it for $300. His second marriage occurred in Illinois, and he selected his wife in the person of Miss Harriett Whitney, a native of Ohio. Five children were born of this union, one of whom died young. The others are Oscar; Lillie J., now Mrs. J. Thompson; Elizabeth, Mrs. Stifers, and William O. Again our subject purchased land in Illinois, going in debt for the same, and resided on that place for eighteen years, when he came to Iowa. He made the trip in a wagon, and bought part of his farm of three hundred and sixty acres. This is now one of the finest tracts in the township and is in a first-class condition. In 1864 Mr. Thomas was drafted into the service, but hired a substitute for $1,000.

For his third wife, Mr. Thomas chose Miss Nannie J. Whitney, a sister of his second wife. They reared a child named Jessie Thomas, who is well educated and a good musician. About 1885 Mr. Thomas removed to town, but is still engaged in farming and stock-raising in connection with his sons. He and his wife are members of the Methodist Episcopal Church, and in politics he is a Republican. His son W. O. is now preparing himself for the Christian ministry. Of our subject it may truly be said that he is a self-made man. Commencing the battle of life without capital or influence, he has fought his way to an honorable position and acquired a handsome competency. 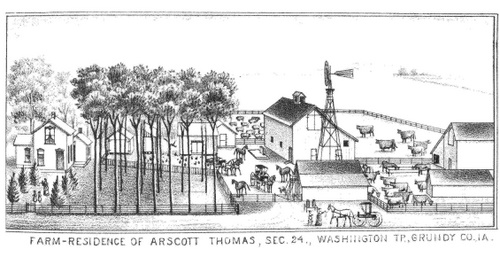