ZEBULON TERRALL. A large class of the farmers of Grundy County lead such modest and quiet lives as to be seldom heard of outside of their own township. They are doing fine work in their community, but do not care to mingle in the more public matters of political life, and devote all their time and energy to the cultivation of their farms. Such men deserve more mention than they ordinarily receive, and we are glad to here present one of them in the person of Zebulon Terrall, who resides on section 27, Grant Township, where he has a valuable estate of two hundred and forty acres.

A native of Alburg, Vt., our subject was born in 1826, a son of Joseph and Mary Terrall. The father died when Zebulon was a lad of eight years, leaving a widow and five children, whose names are Zebulon, Sylvia, Peter, Harriet and Julia, the latter now deceased. Mrs. Mary Terrall was a second time married, and our subject then left home and began to make his own way in the world. The former, after her marriage, moved to Canada, when our subject lost all trace of the family, never hearing a word of them for nearly forty years, when a younger brother found him located in Wisconsin and wrote to him.

When a lad of nine years Zebulon Terrall went to Saratoga County, N. Y., and for six years made his home with a family by the name of McIntyre. After that he worked for four and a-half years on a farm in that state, and at the expiration of that time went to Long Island, where he spent a twelvemonth.

While residing in New York, and when having attained his twenty-fifth year, Mr. Terrall was married to Miss Elizabeth A., daughter of Thomas and Melissa (Swartout) Pearsall. The lady was born in New York, of which state her parents were also natives, and by her union with our subject became the mother of five children, viz.: Ella, Frank, Sylvia, George and John. The children have been given good educations, and at one time Ella and Sylvia were school teachers.

Soon after his marriage, Mr. Terrall moved to Dane County, Wis., where he was one of the pioneers of 1852. His first purchase of land consisted of eighty acres, and there he continued to reside until 1866, making of his farm one of the best improved estates in the county. In the above year our subject came to Grundy County, his object being to find a suitable location. In this he was successful, and in the spring of the following year brought his family hither. Their first dwelling was a house 16x26 feet, and a story and a-half in height, in which they continued to live until their circumstances permitted them to build a more commodious dwelling.

The quarter-section which Mr. Terrall located when coming here was in its primitive condition, and to his acreage he has since added until he now is the proud possessor of two hundred and forty acres of fine farming land. The Terrall family was the fourth to make their home in Grant Township, and all their marketing was carried on at Waterloo and Cedar Falls.

In addition to raising the various cereals, our subject has of late years turned his attention to dairy farming, and was one of the originators of the Grant Township Creamery. In political affairs he is a solid Republican and is ever ready to assist in local enterprises. With his wife he is a member of the Methodist Episcopal Church and commands the high regard of a host of warm friends. 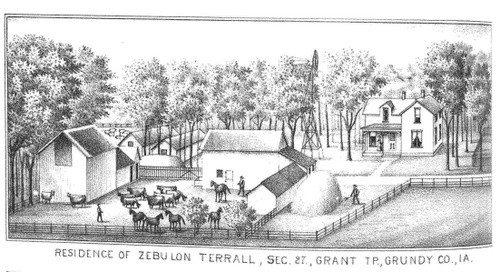