SALMON B. SAYRE is a prominent representative of the agricultural interests of Grundy County. He resides on section 21, Melrose Township, where he has a fine farm. A native of the Buckeye State, he was born in Champaign County, December 28, 1830, and is a son of John Sayre. His father was born in New York, and became one of the early settlers of Logan County, Ohio. He died when Salmon was about seven years of age. Our subject was reared in Logan County and in Rock Island County, Ill., whither the family removed when he was a youth of nine summers. The mother bought land and with the aid of her children carried on the farm.

Mr. Sayre of this sketch continued to reside in Rock Island County for some years after his marriage. His mother died when he was eighteen years of age. In 1850, he was married to Miss Pauline Norman, who was then living in Mercer County, Ill., but was born in Indiana. The young couple began their domestic life upon the old home farm, but after a few years removed to Henry County, Ill., where Mr. Sayre bought eighty acres of land and began the cultivation and improvement of a farm. In 1865, however, he abandoned agricultural pursuits and enlisted in Company E, Eighteenth Illinois Infantry, of which he was made Third Sergeant.

On his return from the war, Mr. Sayre sold his farm, and in the autumn of 1866 came to Grundy County, settling in Melrose Township, where he purchased two hundred and forty acres of partially improved land. There were few settlements in the neighborhood, and the greater part of the land was still in its primitive condition. He broke the rest of his own farm and placed it under cultivation. As his financial resources have increased, he has extended its boundaries from time to time, until it now comprises four hundred and eighty acres. This valuable property is supplied with all the conveniences of a model farm, and is one of the most desirable places of the township. His home is a palatial residence, in the rear of which are barns and outbuildings which are models of convenience.

The Republican party finds in Mr. Sayre a stanch supporter, and he has served as Treasurer of his township and as School Director. He was one of the organizers of the Methodist Episcopal Church of Melrose, which was formed in 1868 with only three members, himself, wife and Merritt Watson. From that small beginning, however, the church has constantly grown and is now in a thriving condition. Mr. Sayre has served as Superintendent of the Sunday-school, and is one of the Trustees of the church. He has lived in harmony with his professions, and his honorable, upright life is well worthy of emulation. In the years of his residence here he has won the confidence and regard of all with whom he has been brought in contact and has a wide circle of warm friends. 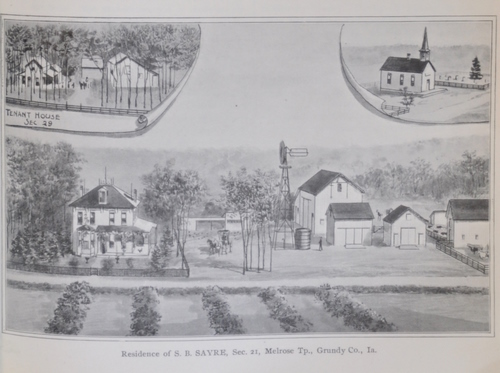