WILLIAM DUTSON. The influence of a truly good man will ever be expanding with the lapse of time, and his deeds of charity and love will live to commemorate his name and perpetuate his memory. It can be truly said that an honored and good man has been gathered to his fathers; but his virtues live after him, and his reputation, sustained under the conflict of a long career of extraordinary activity, bears no blemish, and his name is everywhere mentioned with respect and honor. William Dutson, like many of the worthy citizens of Grundy County, was a native of the Empire State, his birth occurring in the city of Albany, November 19, 1831. His parents, Thomas and Mary (Caruthers) Dutson, were natives of England and Scotland respectively.

The father came to the United States in the latter part of the eighteenth century, and was married in the state of New York to Miss Caruthers, who had emigrated to this country with an invalid sister. Soon after she had crossed the ocean, her brother also came hither. Mr. Dutson was the only member of his family who came to the United States. For many years he was a merchant in Albany, and there reared his family and passed the closing days of his life. In religious belief he was a Universalist; his wife was identified with the Baptist Church. Of the five children born to them, three daughters died in infancy, and Richard died when thirty-three years of age. Socially, the father was a member of the Masonic fraternity.

In the schools of Albany, our subject secured a practical education, and when but a boy began learning the carpenters trade. He was left fatherless when ten years of age, and was reared by strangers. When twenty years of age he abandoned his trade, and going to Wisconsin, bought a small tract of land, which he immediately commenced to clear and improve. In the year 1864, he married Miss Barbara Toogood, daughter of William and Elizabeth (Sanford) Toogood. To this union was born one child, Ida May. In 1870, Mr. Dutson with his family came to Grundy County, Iowa, and settled on one hundred and sixty acres in Washington Township. This he improved and cultivated and made one of the best farms in the township. Here his death occurred in 1890. He was a most worthy citizen, public spirited and enterprising, and was always interested in enterprises of a laudable nature. In politics he was a Republican, and held a number of township offices, discharging the duties of the same in a very satisfactory manner. 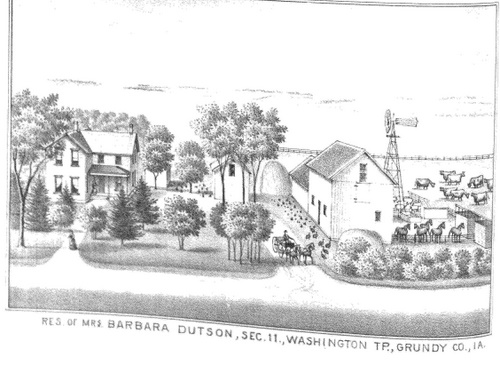