E. JEWETT DUNHAM. An honorable position among the agriculturists of Fairfield Township, Grundy County, is held by the gentleman above named, who is the fortunate possessor of one hundred and sixty acres of land on section 1. He is a native of Illinois, having been born in Lake County, August 26, 1850. His parents, Eber and Lucy (Jewett) Dunham, were natives of Vermont.

The father of our subject was born, reared and educated on a farm in the Green Mountain State, and after his marriage with Miss Jewett emigrated west to Illinois and made his home on a farm in Lake County. Later, taking up his abode in Grundy County, he entered two hundred acres of land from the Government, which is the present home of our subject. Politically he was a stanch advocate of the Republican party, and with his wife held membership in the Advent Church. Mrs. Lucy Dunham, the mother of our subject, was the daughter of Thomas and Rachael (Morgan) Jewett, likewise natives of Vermont. By her union with Eber Dunham were born seven children, of whom those living besides our subject are: P. E., Rachael N., Lois and Eunice F. Mrs. Dunham died while residing in Iowa, at the age of eighty-eight years.

At the age of six years our subject accompanied his parents on the overland journey to this state. When ready to establish a home of his own, he returned to the Prairie State and married Miss Allene, daughter of Lee and Minerva L. (Needham) Taylor, natives respectively of Vermont and New York. Mrs. Dunham was reared and educated in DeKalb County, completing her education in the high school. Her union with our subject has been blessed by the birth of two children, Carnot J. and Eveline P.

Previous to her marriage, Mrs. Dunham, in the spring of 1864, accompanied her parents on their trip to California, the journey, which was made overland, occupying five months. During that time they were subjected to many dangers, and before reaching their destination, which was Santa Clara County, the Indians had attacked their party and murdered several of them. Their journey was also greatly hindered by the Indians stealing twenty-five of their horses. While in Salt Lake City, Mrs. Dunham attended a theater and there saw Brigham Young and many of his wives. After reaching the above county in California, the parents of Mrs. Dunham rented a dairy farm, including seventy-five cows, and for three years made butter, which averaged them over fifty cents a pound. Mr. Taylor is now deceased; the mother is a resident of Cedar Falls.

Our subject has traveled quite extensively through the states and territories, and ten years ago, accompanied by his wife, went to California, visiting her old home in Santa Clara County, where they stayed for a twelvemonth. As a man of clear, well balanced mind, with a good insight into business matters, he is considered to be well adapted to public life, and has held to the office of Township Trustee and Assessor, and has been connected with the School Board for many years. He is a strong Republican in his political views, and socially is a member of the Masonic fraternity and the Ancient Order of United Workmen. 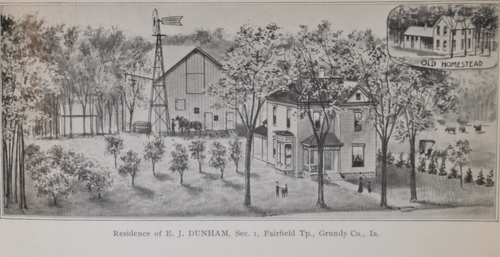