Hampton, Nov. 7 - William Savidge was born in Lincoln county, Ohio, on May 27, 1846. In August 1862 he enlisted in Company G, 45th Ohio regiment and served until the close of the Civil war, during which time he spent seven months as a prisoner.

In the spring of 1870, Mr. Savidge came to Franklin county where he was married to Miss Alice Alberry on oct. 18, 1870. The young couple settled on a farm in Ingham township and they resided there until 25 years ago when they moved to Hampton.

They have three children, Mrs. Ida Roemer, Hastings, Nebr., and Frank Savidge and Bert Savidge, both of Hampton. 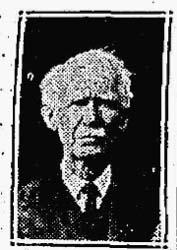