On August 26, 1864, he enlisted and was mustered in as a drummer boy in the Union army. He served until the close of the Civil war when he came to Guthrie county in 1866.

He later came to Franklin county where he was married to Miss Lorena Marshall on May 3, 1874, by the Rev. J.B. Taylor, pastor of the Methodist church. They have one daughter, Mrs. Jessie Molsted of Hampton.

Mr. Connor is a member of the National Fife and Drum corps and for the past eight years has attended the Iowa State fair at Des Moines in that capacity.

Hampton, May 16- A spry veteran is Levi L. Conner, 88, who was a fife player. He was born near Cambridge, Ohio. At the age of 17, he enlisted in company C of the Seventy-Second* Ohio regiment when Lincoln gave his last 100 days call. He did not see active service but was stationed at Camp Galipolis in Ohio. He was listed as a drummer in the army but says that he played the fife most of the time.

In 1866 he came to Hampton and engaged in the carpenter trade. In 1874 he was married to Josephine Marshall. They have one daughter, Mrs. Jessie Malsed of Hampton.

For 12 years Mr. Conner has played the fife with the Civil war drum corps at the state fair and on April 27 played before the I.O.O.F. convention here. He has been the life of the party at the state G.A.R. meetings and until only a few years ago amused his comrades not only with lively tunes on the fife but by such antics as jig dancing.

~Mason City Globe-Gazette, May 16, 1935 (the photo (below) accompanied this article)

*Pension certificate indicates he served with the 172nd OH Inf.

Hampton - A feature of the Memorial day program here was the tribute paid Levi L. Conner, only remaining Civil war veteran of Hampton. For the first time in many years, Mr. Conner, who has been ill several months, was unable to take part in the parade. Deviating from the customary route, the procession of war veterans, scouts, D.A.R.'s and school children passed the Conner home where he was seated on the lawn in a wheel chair. As the line passed the old soldier with the band playing, a marching veteran stepped out and presented him a large bouquet in the center of which was an American flag. Mr. Conner until recently has been active not only at home but at state G.A.R. meetings and with the Civil war drum corps at the state fair, where he was well known for his fife playing.

Notes:
-He is found in records with surname spelled Conner and Connor
-Died 9/27/1937 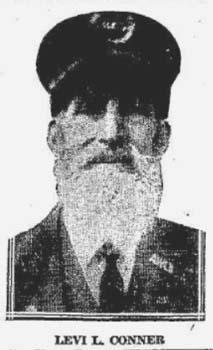