Adam Michael Lack was born May 13, 1975, at Mason City, the son of Gary (deceased) and Veronica (Naumann) Lack. Adam spent his childhood in several towns in northern Iowa including Rockford, Cedar Falls, and Mason City before moving to Buffalo, Wyo. during his freshman year of high school. He was a remarkably gifted wrestler, becoming an AAU national champion at the age of 9 and 4-time high school state place winner in Wyoming. He was valedictorian of his class at Buffalo High School, received an academic scholarship to Brown University and recently received his degree in business economics from Brown University in Providence, R.I.

He had formerly owned and operated the Floyd Y restaurant in Floyd. More recently he had operated the Eagles Nest bar in Nora Springs. Until the time of his death he was an ethanol plant operations supervisor at POET Biorefining. He enjoyed reading, writing and fishing in his spare time.

Adams life was one of caring for others including his mother, Veronica, and his nieces and nephews. He was deeply thoughtful and loving. He was protective of his loved ones. After the death of his father from cancer in 2004, Adam remained at home to help his mother with managing the family farm while pursuing his business ventures and working at the ethanol plant.

One of his best college friends, Ray Rocha, died on September 11, 2001 in the World Trade Center attacks. Another dear friend, Dimitri Gavriel, was later killed in action in Iraq after joining the marines. Regarding the friends he had lost Adam had written, I wish I could fish with Dimitri once more, and do anything with Ray. Adam may be described best in his own writing. In relation to his love of family and friends, One of my favorite occasional occurrences is being awoken early by my giggling nieces, Gabriella and Erica. Time spent with friends, preferably laughing, is a priority for me.

In relation to his quest for answers, I like thunderstorms and truth, because they answer to no one somewhere theres always an equation Im working on in my mind that haunts me; but Ill always break it. He described his heroes as all those who swim against the tide or care for the less fortunate.

He was preceded in death by his grandparents and father.

Memorials may be directed to the Lack Educational Fund of the Knights of Columbus, 1475 325th Street, Nora Springs, IA 50458. 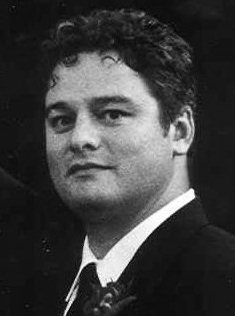