A son of Ambrose S. and Amanda Thurston Gager, he was born in Broome county, New York, Nov. 11, 1840. When he was 11 years old, he moved, with his parents, to Illinois, traveling two weeks by water. One week on a canal boat, on the Erie canal, from Seneca Lake to Buffalo, thence on the Niagara Propeller to Chicago, by way of Lakes Erie, St. Clair, Huron and Michigan, landing in Chicago in October, 1851.

Through perseverance, he acquired an education, attending district school winters, and assisting his father with the farm work in the summers.

When the Civil war was declared, he was one of the first volunteers, enlisting with Co. B, 105th regiment, Illinois volunteer infantry, and was mustered out at the close of the war, June 7, 1865. His army record is an interesting one, and the school children never tire of hearing him tell of his march with Sherman to the sea, and many amusing anecdotes of his army life.

Having being conservative with his earnings he was able, at the close of the war to buy a farm, and establish a home for his bride, and they lived in Illinois for several years. In 1872 they came to Iowa and purchased a farm in Bethel township, where his family of seven children, grew to manhood, and his wife passed away.

In 1892 he bought a place in the picturesque village of Alpha, and moved there with his family. The place included a strip of land along Crane Creek river, and this he converted into a park, clearing it of scraggly oaks and brush, and setting out 300 trees. The next few seasons were dry, and he had to carry water to water the trees, but they rewarded him by developing into nice little shade trees, in a short time.

He built a boat house, which also served as a shelter in a storm, bought a gasoline launch, and several row boats, which added much to the pleasure of picnickers. He also built tables and seats, and put up swings, teeters, etc. for the children. This was the first public park in this part of the state, and he did a thriving business for several years, with picnic parties and campers. He ran a quiet, orderly place, and girls' clubs, and people with families of children, enjoyed the safe and restful place for a week or two of camping, boating and fishing. One of his choicest possessions is a stack of record books, where his visitors to the park have registered.

Mr. Gager is well known all over this section, as a promoter of every good cause. He was an untiring member of the Independent Order of Good Templars, while that order existed, and has always been an active worker in the church and Sunday school, public school and all patriotic organizations. He never turned down a request for aid, in any worthy cause.

He laid down the first dollar to build the first sidewalks Alpha had, which were of planks. When concrete walks came into prominence, Mr. Gager and two of his neighbors agreed to build walks across their own property, to get the project going, which they did, and then contributed toward building walks to the business part of town, and to the church. Every needy family in the community felt the benefit of Mr. Gager's kindly hand, but these things were done so quietly that few people ever knew of them.

Two years ago Mr. Gager went out to stay with his son, Charles and family on the old homestead, but he still takes an active interest in Alpha's activities and keeps in touch with the world with his radio, which he enjoys to the utmost. His other son, Ernest Gager, lives near him and he has 12 grandchildren and 18 great grandchildren.

His oldest daughter, Clara, a trained nurse, gave her life caring for others during the flu-epidemic a few years ago, and two other daughters, Eva May and Alice M., and two sons, Clarence H. and Elmer E., are also deceased.

Mr. Gager attended the soldiers' reunion at West Union last year, and was greeted by six comrades who were in his company. 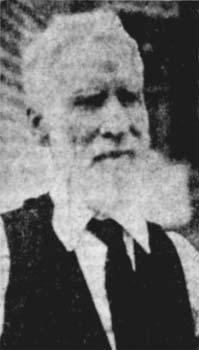