The little city of Hawkeye, in this county, is to have what many larger ones are much in need of, and that is a free public library. Mr. Charles W. Bopp, president of Bopp Bros. State Bank, whose likeness [is shown], has given to the city of Hawkeye $500 as a start for the library under the following conditions:

I, Charles W. Bopp, of Hawkeye, Fayette county, Ia., in consideration of the conditions hereinafter stated, do hereby give, grant and donate to the Incorporated Town of Hawkeye, in the county of Fayette, state of Iowa, for the purpose of establishing a free public library in said town in accordance with the laws of Iowa governing the same as found in Title Five, Chapter four of the Code, the sum of Five Hundred Dollars ($500.00) upon the following conditions, viz:

First - That the word "Free" shall appear in the title and name of said library.

Second - That said sum of Five Hundred Dollars ($500.00) shall be used exclusively for the purchase of books for said library.

Third - That said library shall be kept open and maintained continuously under the supervision of a competent Librarian for at least two hours of each day for two days of each week.

Fourth - That the following named persons shall constitute a committee to select books for said library to the amount of said donation, to-wit: Prof. F.H. Bloodgood, Prof. J.R. Gardner, Mrs. Maria Weed, Prof. L.B. Moffett, Prof. G.E. Finch, A.J. Parsons, and G.E. Dibble, and when selected, said books shall be purchased by the board of Library Trustees.

Fifth - In case of the violation of any of the foregoing conditions, then in that event said donation, in whatever kind of property it may be, whether consisting of books, money or other property, shall revert to and become the property of the said Charles W. Boop, grantor, his heirs or assigns, at his or their option.

Ordinance No. 19 - An ordinance for the formation, establishing and maintaining of a Free Public Library.

Be it ordained and enacted by the council of the incorporated town of Hawkeye, that a free pubic library be established and maintained opened to the use of all the inhabitants as provided in title 5, chapter 4, sections 727 to 732 inclusive, of the Code of Iowa.

That said library shall be known as the "Hawkeye Free Public Library."

That said library shall be kept open and maintained continuously under the supervision of a competent Librarian for at least two hours of each day for two days of each week.

Many generous gifts of books have already been tendered the library, chief among them being a set of the Britania Encyclopedia from the Chicago Inter Ocean.

Charles W. Bopp, who has laid the foundation for a fine public library, and a splendid picture of whom we present, was born and raised in Fayette county. He is a genuine Iowa product and although but 29 years old he is president of the bank, a stock holder in the Carey Safe Co., and is interested in many other enterprises.

He spent two years at the State Normal School at Cedar Falls, having worked his way through school the same as many another poor boy. After leaving school he taught for some time in the county.

He has been in the employ of the Carey Safe Co., of Buffalo, N.Y., for the last nine years and during the last year has sold nearly half a million dollars worth of safes. He has traveled in nearly every state in the Union including Canada, Cuba and Mexico.

His politics are republican, and he is interested in four other banks. He is a 32d degree Mason and a member of the Odd Fellows. 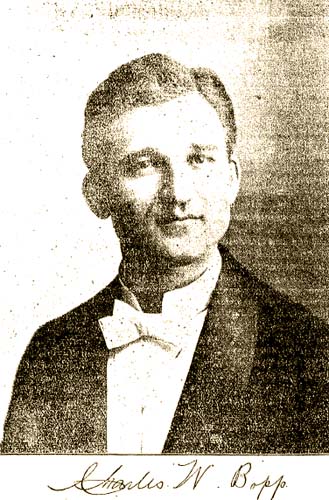