Allyn, Mrs. Eunice Eloisae Gibbs, author, born in Brecksville, a suburb of Cleveland, Ohio. Her father, Dr. Sidney Smith Gibbs, was a native of Schoharie county, N.Y., and her mother, Eunice Lucida Newberry, was a native of St. Lawrence county, in the same state. Dr. Gibbs was practicing in Brecksville when he married Miss Newberry, who was a cultured and successful teacher. He was a relative of Sidney Smith, and was naturally of a literary turn. Mrs. Gibbs possessed similar talents, and many article from their pens were published in the press of the day.

Their family consisted of four children, of whom Eunice was the third. After various changes of climate in search of health, Dr. Gibbs died in comparatively early manhood, leaving his wife with three young children to provide for. The devoted mother most nobly filled her trust. After his death the family moved from Jackson, Mich., to Cleveland, Ohio, where Eunice was graduated with honors from the high school.

She intended to become a teacher, but her mother dissuaded her and she remained at home, going into society and writing in a quiet way for local papers. Her articles were signed by various pen-names in order to avoid displeasing one of her brothers, who did not wish to have a "blue-stocking" in the family. Her first published poems appeared in the Cleveland "Plain Dealer," when she was only thirteen years old.

Besides composing poems for recitation in school, she often wrote songs, both words and music, when she could not find songs suited to various occasions.

In 1873 she was married to Clarence G. Allyn, of Nyack, N.Y. After spending several years at Nyack, New London, Conn., and Auburn, N.Y., they moved to Dubuque, Iowa, where they now live.

Mrs. Allyn is a prominent member of the Dubuque Ladies' Literary Union, and for eight years she has served as president of the Dubuque Woman's Christian Temperance Union. She has been connected with the local press at times, and she has also won distinction as an artist. She is a member of the Episcopal Church, is broad in her views, while stricly orthodox, and is an ardent admirer of Oriental philosophy.

Before her marriage she gained valuable experience as Washington correspondent of the Chicago "Inter-Ocean," a position which she filled for a year, during which time she also wrote numerous articles for the St. Louis "Globe," the New York "World", and before and since then for varous New York, Boston, Indianapolis, Philadelphia and Chicago journals.

She is a pointed, incisive writer, and all her work, prose or poetry, has an aim, a central thought. In her own city she has quietly inaugurated many reforms and educational movements, doing the work, not for notoriety, but prompted by her inborn desire to do something towards lifting up humanity.

~ A woman of the century: fourteen hundred-seventy biographical sketches accompanied by portraits of leading American women in all walks of life; Portraits and biographies of prominent American women; F.E. Willard & M.A.R. Livermore; 1893; pg 21-22 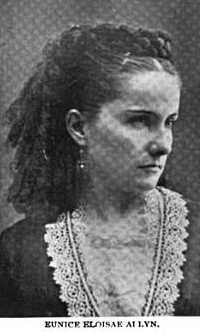