A.J. Elder, 48, former Perry resident and assistant general manager of the Milwaukee railroad, died at the Washington boulevard hospital in Chicago this morning at 2 o'clock following an operation performed for relief of a gall bladder disorder.

Mrs. Clara Elder, the mother, left last night for Chicago after word of her son's serious condition had been sent to Perry but she failed to arrive before death. Only one month ago on October 4, another son, Chester, died and his rites and interment were held here.

Funeral services for A.J. Elder will be held in Chicago Saturday morning at 9:30 in the St. Malachi church, Oakley avenue and Washington boulevard. A special train will leave Chicago following the rites with the body and funeral party for Savanna, Ill, where interment will be made at 2 o'clock. The body lies in state at the Berz Funeral home in Chicago, 41 North Leavitt street.

Surviving Mr. Elder are his wife, the former Miss Alta Dahl, daughter of Wm. Dahl, oldtime Perry engineer, and one daughter, Janet, now a student at Mt. Carroll Frances Shimer school. One sister, Mrs. Jack Kuykendall, Pittsburgh, Pa., and one brother, Alphonse, Sioux City dispatcher, as survives, in addition to the mother. The father and two brothers preceded in death.

Mr. Elder was born in Pierson, Iowa, January 8, 1892 and raised in Perry and started service with the Milwaukee railroad company here as a call-boy graduating to a job as operator after he had learned telegraphy. In 1912 he was appointed as train dispatcher and his rise from that post was rapid. He held the post of Chief dispatcher, train master and assistant superintendent, and from there advanced to superintendent and general superintendent. His last promotion came in September 1939 to the position of assistant general manager. It was while he lived in Perry that he was married to Miss Dahl and their home has been successively at the points where his advancements called him. He was well known and loved by many friends in Perry. 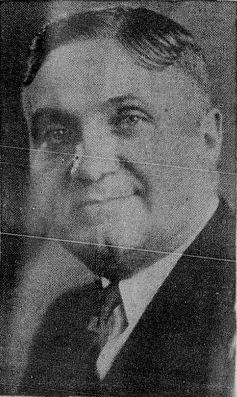