The death of Grandma Marsh, past ninety years of age, occurred Sunday at her home on Commercial St. Funeral services were held Tuesday, conducted by Rev. Kirby, pastor of the M.E. church. Miss Mary Ellen McCracken and Joseph Marsh were united in marriage at Webster, Mass., Dec. 24, 1852, and celebrated their sixtieth anniversary. After their marriage they moved to Worchester, Mass., where they lived three years, moving to Volga City, Iowa, in 1855. From thence they moved to a farm in Fayette county where they lived for nearly forty years. After two years in Sheldon they moved to Strawberry Point in 1896, where they have since resided. Mr. Marsh passed away Feb. 15, 1913. She was the mother of eleven children, five of whom survive her: Mrs. Hattie Loomis of Georgetown, Minn.; Geo. Marsh at home with his mother; Mrs. Jennie Furgeson of Bryant, S.D.; Clarence and Laurence Marsh of Cedar Rapids; besides a number of grandchildren and great-grandchildren. The remains were laid to rest in the family lot in our beautiful cemetery.

Photo is from the Strawberry Point Mail-Press, Jan 4, 1912, included with an article on the occasion of their 60th wedding anniversary. 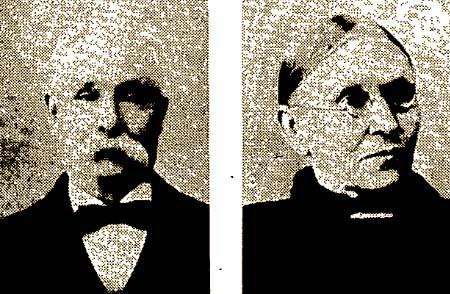