Friends may call at the Schultz Funeral Home in Monona.

Services will be held at 2 p.m. Monday at the Monona Methodist Church, with burial in the city cemetery.

Survivors are his wife; one son, Lowell, Postville; and one daughter, Mrs. Elmer Drahn, Farmersburg, Ia.

Funeral services for Henry Fox, 79, were held Monday afternoon at 2 o'clock at the Methodist church with Rev. E. Wayne Hilmer officiating. The body lay in state at the church from 1 o'clock until the time of the services. Burial was in the City cemetery.

Mr. Fox died Friday afternoon, May 13, at 4:30 o'clock at the Postville hospital. He had been a hospital patient for two weeks and during that period spent three days at University hospitals at Iowa City. He suffered a heart attack last fall and was hospitalized for a number of weeks at that time.

He was born a son of Jacob and Elizabeth, nee Seitz, Fox in Giard township, Feb. 28, 1881. His entire life was lived in and around Monona. He lived first with his parents on a farm in Giard township. In 1918 he came to Monona, where he followed the carpenter trade.

He went into business by himself in 1926 operating a hardware store. In 1934 he joined the Pape Bros. Hardware store as a partner, the firm being known as Pape & Fox. He retired in 1950 when the firm sold the store to R.L. Evans. After his retirement he still assisted in the Evans Hardware store and also worked at the McCune Dairy Supply store.

He was educated in a rural school of Giard township and was a member of the Monona Methodist church.

He was married Feb. 23, 1909 to Elsie Schroeder in the Lutheran church at Monona by Rev. Otto Wappler. The couple enjoyed the privilege of celebrating their golden wedding anniversary in 1959.

Preceding him in death were his parents and three sisters.

In addition to his wife, he is survived by a daughter, Mrs. Elmer (June) Drahn of Farmersburg; one son, Lowell of Postville; five grandchildren, and 11 great-grandchildren.

Music at the services was provided by Mrs. Ben Frese Jr and Mrs. George Martin, Mrs. Ivon J. Schultz was the organist. Business places in Monona were closed in his honor from 1:45 to 2:45 o'clock during the funeral services. 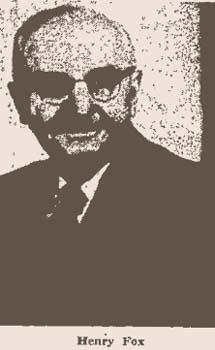