The following obituary & photo were published on Find-A-Grave by AJ Cassel, 1st cousin 3X removed, of Cora Bushfield's husband, J.A. Bushfield. The obit & photo have been posted on the Clayton co. IAGenWeb obituary board with AJ's permission.
----- ----- -----

It is with a deep and sincere regret that we chronicle this week the death of one of Miller's most estimable women, Mrs. J.A. Bushfield, who passed away Tuesday afternoon at 1:30, after a very brief illness of pneumonia.

Her death was a distinct shock to many who had not known of her illness until a short time before she passed away. The entire family was at her bedside when the last summons came, Mrs. F.J. Hoffman arriving on the noon train an hour before her mother's death.

Cora E. Pearson was born in Clayton county, Iowa, in 1861 and spent several years of her childhood on a farm. She was married to J.A. Bushfield at Atlantic, Iowa, in 1880, and in 1883 they moved to Miller. Three children were born to the Bushfields: Harlan J., Laura D. of Miller, and Mrs. F.J. Hoffman of Clarion, Iowa.

One of the few remaining pioneer women who came to Miller in 1883, Mrs. Bushfield was prominent in the community's life for forty years. She was an ardent church worker in the Presbyterian church of this city of which she was a member, and also in the Ladies Aid Society, and other church organizations. She was always an active member in Eastern Star circles, being a member of Crescent Chapter No.4 for many years. Although for a number of years past her health had not been of the best, she was always willing to take an active part in promoting community welfare. In her home she was an ideal companion and mother, and in the little family circle which has clung together with such affection she will be sorely missed.

Funeral services were held today at the home, the Rev. T.J. Simons reading the services. The large number of friends who came to pay their last respects to her, and the beautiful floral offerings all spoke of the love and respect this community felt for her.

Notes: Cora Pearson Bushfield, is the contributor's (S. Ferrall) 1st cousin 3X removed. Cora's paternal grandparents were Richard Pearson & Mary A. Murch, early settlers in Clayton county, both buried in the Grand Meadow cemetery. Cora's parents were Richard M. Pearson and Annette Bockover, who are buried in the Postville cemetery. Cora was the mother of Harlan J. Bushfield who was a 2-term governor of South Dakota from Jan. 3, 1939 - Jan. 3, 1943. In 1942 Harlan was elected to the U.S. Senate from S. Dakota, serving Jan. 1943 until his death in Sept. 1948. 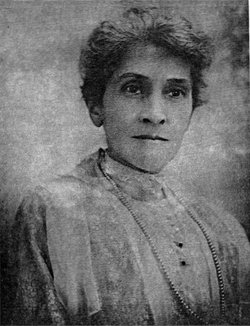