Ronald Wold, 22, was killed in an accident Saturday a.m., May 24, at McGregor. He is the son of Mr. and Mrs. Burdette Wold also of Monona, and the nephew of Mrs. Louis Reirson, Elgin. Ronald had recently been discharged from the service. Funeral services were held Monday, May 29, at 1:30 at the Methodist church in Monona.

Ronald Wold, 22 year old son of Mr. and Mrs. Burdette Wold of Monona, was killed when the car in which he was riding plunged off a 20 foot embankment near McGregor early Sat. morning and lodged between two fuel tanks. the large gas tank sprung a leak and gas flowed onto the ground in the area.

Wold was thrown out and killed outright, while Rose was trapped in the car, and saturated with gas and oil.

Military escort was present and furnished honors at the grave.

He was the son of Burdette Orlando and Helen, nee Bernhard, Wold. He was born May 19, 1947 at Monona. He passed away May 24, 1969 in an auto accident at McGregor. He attained the age of 22 years and 5 days. He was educated in the MFL Community Schools.

He served in the United States Navy.

He was a member of the Monona United Methodist Church.

He is survived by his parents, and two brothers, Richard Wold of Maquoketa, Iowa and Mark at home. 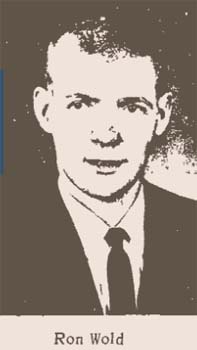