Elkader- Services for Mrs. L. A. Meder, 49, who was killed in an auto crash Saturday, will be conducted Tuesday at 1:30 p.m. at Witt Funeral Home and at 2 p.m. in Peace Evangelical and Reformed Church here.

The Rev. Paul Kitterer will officiate. Burial will be in the family lot at Mederville, six miles south of town.

Mrs. Meder was killed when a car driven by Leroy Dittmer, 52, went out of control on highway 218 between Solon and Iowa City. Dittmer suffered a concussion and was taken to Mercy Hospital, Iowa City.

She was graduated from high school there and attended Mankato Teachers College. Following her graduation, she taught school at Starbuck and Hayfield, Minn., before accepting a position as kindergarten teacher in a Waterloo school.

She taught there four years during which time she met Dr. L. A. Meder, a dentist. They were married Sept. 5, 1932, at Austin, Minn.

Survivors, besides her husband, include a daughter, Prudence, an SUI freshman; a son, Peter, 12, and a brother, Carl Oby of Alameda, Calif. 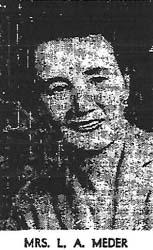