A sad accident occurred yesterday afternoon at the Mary Blietz farm east of town when her youngest son, Roger, eight years of age, fell from a manure spreader operated by his brother Giles, the wheels passing over his chest and killing him almost instantly.

The family have the sympathy of the whole community.

The lines, "he came and dwelt with us awhile, the, departing for a better isle, left memories of a boyish face and a love no one can e'er replace," might well be applied to the life and untimely death of Roger Blietz, who was killed accidentally at his home east of Monona on Wednesday, October 23, 1935, as a result of having been run over and fatally crushed by a farm conveyance, death occurring almost instantly.

Truly was it said of the deceased whose allotted span of life numbered only seven years, that "in being made perfect in a short space he fulfilled a long time." During the brief period of his life he endeared himself, not only to a large circle of playmates and friends, but more especially to the immediate members of his family, whose hearts are heavy at his untimely going, and who doubtless have wondered, as many others before them have wondered when confronted with a like bereavement, why a life so young and full of promise, as Roger's unquestionably was, should have ended so soon. All one can adduce here is the beautiful and consoling doctrine that heaven would not be a true home without children, and hence the Angel of Death must summon the young as well as the old in order to maintain a proper balance between the two in that eternal home beyond the skies, where all, regardless of age, "are made perfect in glory."

Roger Damion Blietz, youngest son of Mr. and Mrs. William Blietz, was born at Monona, Iowa, December 10, 1927, and departed this life October 23, 1935 at the age of seven years, ten months, and thirteen days.

Five years ago his father preceded him in death, leaving an irreparable void in the family circle, wherein now occurs another empty place, that of a beloved son and brother gone to join his father in that other land "from whose shores no traveler e'er returns."

Last June Roger made his first holy communion at St. Patrick's Catholic church this city, thereby becoming a practicing member of that church. He attended the rural school near his home, where his sunny disposition made him a universal favorite with teachers and schoolmates alike.

There remains to mourn his untimely death, his mother, Mrs. Blietz; two brothers, Giles William and Marion Francis, both at home; his paternal grandfather, Charles Blietz; his maternal grandmother, Kathryn Lestina; several uncles and aunts; numerous cousins and other relatives, and a host of friends.

Funeral services were conducted Saturday morning October 26, at St. Patrick's Catholic church Monona, Iowa, and burial was made in the adjoining cemetery. Rev. Fr Gerald Steiert, cousin of the deceased sang the requiem mass and preached an eloquent funeral sermon. The funeral was largely attended.

I can not say and I will not say
That he is dead, He is just away
With a cheery smile and a wave of the hand
He has wandered into an unknown land.
-James Whitcomb Riley 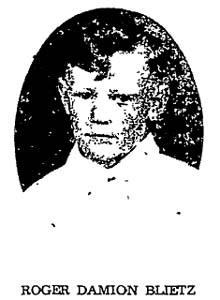