John Wesley Stahl, better known as "Uncle" John Stahl, passed away at the hospital in Marshalltown Thursday evening at 8:20 after a short illness. The funeral will be held at [illegible] Sixth avenue, Sunday afternoon at 2:30 o'clock. The Masons will have charge of the service. The interment will be in the family burying ground at Volga, Ia., where the remains will be taken Monday morning. The remains will be at the undertaking establishment of John B. Turner & Son until Sunday morning.

In 1862 he enlisted from Clayton county, Iowa, and served throughout the civil war. He was married September 10, 1865, to Miss Philena P. Silver at Strawberry Point.

He began work as solicitor for the Farmers' Insurance Company thirty years ago, then he was promoted to district agent, later made a special agent, and finally promoted to the office of adjuster. He was always a faithful worker, and was well liked by everyone who knew him.

He retired as adjuster on his sixtieth birthday, two years ago, and during the year 1906 did some special work for the company, while his health permitted it.

He had been a resident of Cedar Rapids since 1885, was a member of the Masonic order, the Elks, the G.A.R., and was popular as the president of the Commercial Travelers' club when that was in existence in this city. He was always in demand at campfires and reunions of the Old Soldiers', and was one of the most popular men among his acquaintances.

Mr. Stahl is survived by his wife; also living at Arlington, Ia.; two daughters, Mrs. John W. Felix of this city, and Mrs. A.L. Kugel of New York, and one son, Edwin, of this city.

Deepest sympathy for the family is heard everywhere throughout the city by all who knew Uncle John Stahl.

John W. Stahl, a former well known resident of this county and for many years connected with the Farmers' Insurance Co., of Cedar Rapids, died Saturday at the Soldiers' Home at Marshalltown. His remains were brought to Volga, Monday, for burial under the auspices of the Masons.

Mr. Stahl was a member of Capt. Boardman's Co. D, 21st Iowa. We learn that five of that company have passed away since the last reunion at Strawberry Point.

"Uncle" John Stahl, for years a road representative of the Farmers' Insurance company, and one of the most conspicuous figures in Cedar Rapids, died last night in the Soldiers' Home at Marshalltown. "Uncle" John had been in failing health ever since he left the insurance company early last summer. After leaving Cedar Rapids he and his wife took up their abode in Arlington, Iowa, where "Uncle" John had purchased a little home.

He was with the Farmers' Insurance Co. for nearly thirty years and during his long connection with that concern he became widely known, and gained a large circle of friends. As a reward for his long and faithful service the insurance company retired him on a pension.

The body will be brought to this city for burial and the services will probably be in charge of the Masonic bodies. (Cedar Rapids Gazette)

The funeral services were held from the residence of John W. Felix of Cedar Rapids, Sunday, under the auspices of Mt. Hermon lodge No. 263 A.F. & A.M. and the body was taken to Volga City for interment. Deceased was a son of Mrs. Mary Stahl and a brother of our fellow townsman, Benj. Stahl, who attended the funeral, and was also well and favorably known to many of our citizens. 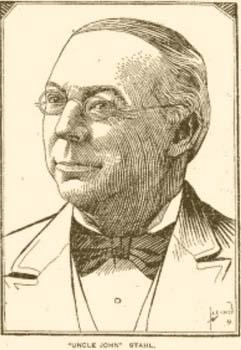