She was born Aug. 15, 1916, in Canoe Township, north of Decorah, to Frank and Sarah (Welsh) Willson. She attended school at Burr Oak and Decorah.

She was married to Raphael Carolan on Nov. 22, 1934, at St. Benedict's Church, Decorah. After living a short time near Peosta and Anamosa, the family moved to Elkader in 1942. Gertie and Ray were married 64 years. She was involved in many community and church activities.

She was preceded in death by her parents, her husband, a son, David; twin infant sons, Francis and Thomas; a sister, Florence Carolan; and two brothers, Paul and Robert Wilson. 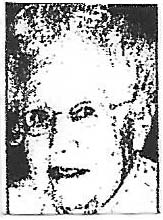