Farmersburg, Ia., Jan 7 (1922) Special: With the death on Dec 31 of Carl Klinkenberg at the home of his daughter Mrs. Charles Radloff, recently, the last of five settlers who came here from Germany in 1857 passed away.

Mr. Klinkenberg was 90 years old, having the distinction of being the oldest man in Farmersburg. He is survived by seven children, Wilhelmina, Mrs. Charles Radloff, Herman, Wilhelm, Marie, Mrs. William Martens, and Heinrich, with 24 grandchildren and 27 great grandchildren.

Mr. Klinkenberg was born in Wusenthien, Pomerania, Germany, on March 28, 1831. On April 20, 1857, he was married to Miss Dorothea Mandelkow. They left Germany on June 18 of the same year coming to Clayton County, Iowa. He worked on a farm near Elkport during the first few months of his residence in America and later rented acreage near National. In 1860 he purchased the first 40 acres of the present Klinkenberg homestead.

Mrs. Klinkenberg preceded him in death in 1903. After his wifes death, Mr. Klinkenberg sold his land holdings to his children.

Mr. Klinkenberg enjoyed unusually good health up to the last year, but since the death of his son August, he failed noticeably and death beckoned as the old year was dying.

Source: Newspaper article has the year 1922 at the top of it. The title of the newspaper is cut off except for an IS AND WISCO.

Submitter used to be a Radloff 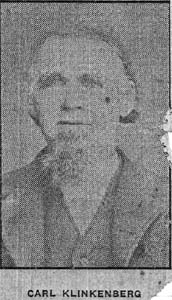