Col. Nicholas O'Brien Noted Veteran, Dead
McGregor, Aug 16 - Word has been received here of the death at Denver of Col. Nicolas J. O'Brien, the distinguished Iowa veteran who in the winter of 1865, as captain of Company F, Seventh Iowa cavalry, saved Julesburg, Colo., then a frontier camp and overland stage station, from capture at the hands of 2,000 Indians.

The savages had surrounded the fort and it appeared that its defenders must soon give way to them. With his company of Iowa troops, Colonel O'Brien charged thru the Indian lines, reached the garrison and defended the garrison in such a gallant manner that the Indians abandoned the attack two days afterward. For this service he was made a colonel.

Col. O'Brien lived in McGregor for a number of years, and during the Civil war raised and driled two companies here. After the war he married Emma Boynton, the daughter of one of McGregor's oldest residents and took her as a bride of 17 years to live in the fort on the Colorado frontier.

For most of the time since the war Colonel O'Brien had been in the employ of the United States land department in the west.

His widow will return to McGregor to live. 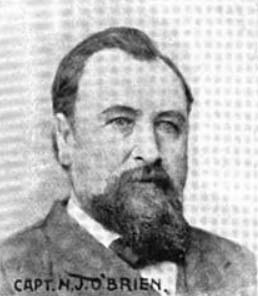