Their three daughters and their families, Mr. and Mrs. Roy Hodson and children Flora Jean and Richard, of Winona, Minn.; Mr. and Mrs. Milo Moody and daughter Lois of Marquette; and Mr. and Mrs. Francis McMillin and son Donald of McGregor; and Mrs. Clara Siegele were present.

Mr. and Mrs. Marsh were married at Elkader on Sept. 17, 1885. After their marriage they went to Postville where they lived for approximately 20 years. They lived for a short time at Waterloo and then came to a farm on Evergreen hill near McGregor 28 years ago. For the past five years they have lived in McGregor, after having retired from the farm. 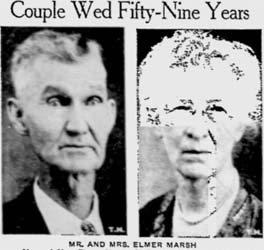