Col. Dale Walters has had his name on many, many auction bills, but one printed at the Guttenberg Press recently was unique in that the well-known auctioneer was listed as the proprietor, rather than as auctioneer. Walters has retired from the auctioneering business after 35 years and held a sale June 11 at his farm between Colesburg and Millville, prior to moving to Guttenberg.

Walters started auctioneering in 1948 and looking back on his many years commented, "It's an interesting business if you can take the weather in the winter time and heat in the summer time. One thing about selling a sale - if you get tired you can't say 'We'll sit down and rest awhile.' The sale must go on."

The auctioneer said the coldest sale he ever had, and one he can remember very well, was the Arleen Troester sale at Colesburg. The temperature was 10 to 15 degrees below zero and there was some snow blowing. "She had a large machine shed which was used for a lunch stand. It had heat on each end and people would go in there, warm up, and come out to bid. We had two long lines of good machinery out in an open field. People would sit in their cars until the implement they wanted to bid on came up, and then they would get out of their cars and bid. We had the sale over by 3:30 so everyone got home early. Lots of people had white spots of frost on their faces."

Walters notes that there are fewer farm sales than there used to be, since many small farmers have sold out to larger farmers. "Now the farm sales will be much larger and fewer," he says.

He says if you want a successful sale, "You want to keep things moving as people will go along with the auctioneer on a cold day and get home early." Walters says he has helped advise many young auctioneers in the past. "I started auctioneering in Guttenberg and have sold tons of furniture and antiques," said the long-time auctioneer. That's one reason Guttenberg has held a fond spot in his heart and why he has chosen to retire there - along with the fact that he is an avid fisherman and is looking forward to devoting his time to that hobby. He has moved to the senior citizens housing complex on Schiller St.

"I want to thank Mr. Charles Millham of the PRESS and the Kelloggs for their prompt printing service through the years and Carl Neiers," concluded Walters.

For more family info. & lots of pictures see the Walters Family Album in the 'Photos' section on the Clayton co. IAGenWeb site.

Photo caption: Col. Dale Walters has retired after 35 years as an auctioneer. He holds the cane that he used when conducting auctions. 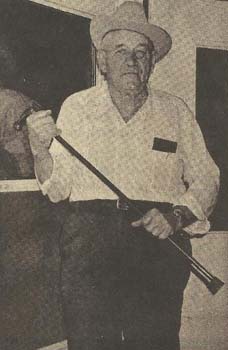