OPEN HOUSE WILL HONOR SARGENTS ON GOLDEN DATE
(Courier Special Service)
STRAWBERRY POINT - Mr. and Mrs. Harford Sargent will be honored at open house from 2 to 4:30 p.m. Sunday in the Franklin Hotel dining room in observance of their golden wedding anniversary.

Mr. Sargent and the former Nellie Jewett were married on Feb. 7, 1906, at the Jewett home southwest of Strawberry Point. They lived in the Lansing and Oelwein areas and moved to their present farm near Strawberry Point 15 Years ago.

Mrs. Sargents hobby is handmade quilts. She has made one for each of her children and her present aim is to make one for each grandchild.

Sources:
~ The announcement of an open house to celebrate their Golden wedding anniversary was published Waterloo Daily Courier on Tuesday, Feb 7, 1956 on page 9.

Top: Harford and Nellie at the open house given in honor of their 50th wedding anniversary on February 12, 1956

Bottom right: Harford sitting with his brothers Ralph, Emery and Stanley at the open house. 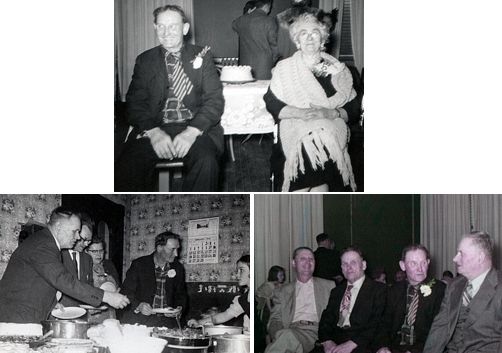