There are not many persons who are privileged to celebrate their fiftieth anniversary of their wedding day. Last Saturday there was celebrated the Golden Wedding of two of our lifelong residents, Mr. and Mrs. Fred Dunsmor. Mr. and Mrs. Dunsmoor were married at the Sargent farm home on January 23, 1876, the home where Mrs. Dunsmoor was born, and located about two miles west of Strawberry Point. They both have lived in this township all of their lives, except for a period of two and a half years spent in Kansas. They went there following their marriage. The Golden Wedding Anniversary celebration, sponsored by Mrs. Bertha Dunsmoor, their third daughter was held in the Methodist Episcopal Church at noon on Saturday last, January 23, 1926. The guests assembled in the auditorium and Mr. and Mrs. Dunsmoor were brought from their home by some of their friends. When all were seated Mr. and Mrs. Turner sang two songs,  I Love You Truly by Carrie Jacobs Bond, accompanied by Miss Vera at the piano, and When You and I were Young, Maggie, by George W. Johnson, and with the same pianist. Then Rev. Turner congratulated couple on their achievement of having lived together for fifty years, after which they renewed the marriage vows that they had taken fifty years ago. Congratulations followed. A sumptuous lunch was served in the dining hall of the church which all present enjoyed. Of the immediate family attending there were Mr. and Mrs. Gruman and family of Lamont; Mr. and Mrs. Grace Smith and family of County Corners; Mr. and Mrs. Bertha Dunsmoor and family of County Corners; Mr. and Mrs. Louisa Wells and family, and Miss June Berry of Cedar Rapids; and Mrs. Mabel Rogers and children of La Crosse, Wisconsin. In all fifty two relatives were present. These with the neighbors and friends numbered one hundred and twenty-five persons. 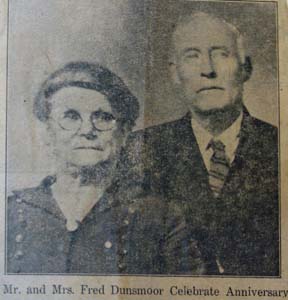