This is to Certify, that on the 10th day of November A.D. 1949
at Garber, Iowa in said County
according to and by authority of law,
I duly Joined in Marriage
Clyde Edwin Jennings
and
Helen Margaret Walters

Marriage solomnized in the presence of

Added by Reid R. Johnson, 9/16/2016, the newspaper announcement of the marriage:

Garber: Before the altar of St. John's Evangelical and Reformed church in Garber, Miss Helen Walters, daughter of Mr. and Mrs. Dale Walters of Colesburg, became the bride of Clyde Jennings, son of Mr. and Mrs. Arthur Jennings of Garber, on Thursday. The Rev. Walter Vonderhoe performed the single ring ceremony.

During the ceremony Berniece Thein, cousin of the bridegroom, and Helmuth Landt, friend of the couple, sang "If I Could Tell you Through The Years" and "The Lord's Prayer."

A reception for 75 guests was held in the church parlors immediately following the ceremony, and the wedding party enjoyed a turkey dinner at the municipal building in Guttenberg, sponsored by the American Legion Auxiliary of Guttenberg. Later a dance was held at Lakeside Ballroom in their honor.

The scan of the document and a photo of Clyde & Helen taken Oct 18, 2009 were contributed by Helen Jennings. 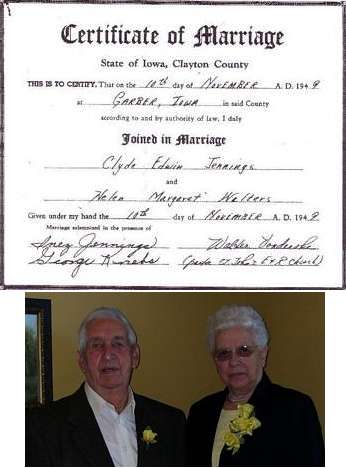