Members of the Grand Meadow Country Club celebrated the club's 90th anniversary March 2 where it all began nearly a century ago. The first meeting was hosted by Mrs. John Leui on March 24, 1916, in the home now occupied by club member, Brenda Rekow. Brenda and her husband, Collin, currently operate a dairy farm on the site and B's Bed and Breakfast at the home.

Along with Mrs. Leui, other club organizers were Mrs. John Backhaus and Mrs. George Pixler. Club records show that the women saw a great need to get the neighborhood women together for fellowship and service. The trio sent out 25 invitations to women in the area, and 19 ladies braved dirt roads by horse and buggy to come to the Leui home for the first meeting of the Grand Meadow Country Club.

The first social gathering of the club saw 68 people attend a party at the home of Anna Hankland. The event included a May pole for the children, horseshoe pitching for the men and much more.

Originally, dues were 25¢ per year and refreshments were to consist of four items. In future years, the dues were voted upon and seemed to vary from year to year somewhere between 25¢ and $l.00.

Sewing projects were done at most of the early meetings. The projects, done for the Red Cross, consisted of many garments, including pajamas, hospital shirts, housewives aprons and suits. According the minutes, sometimes as many as 12-17 pairs of pajamas could be completed at one meeting.

During World War I the club worked for war relief. The club history book reports the group sang songs like, "When Johnny Comes Marching Home Again" and the "Red, White and Blue" while working on their projects.

Music was a big part of early club activities. Members enjoyed singing, and song books were purchased in 1922. They oftentimes listened to the phonograph during the meetings. In 1925 they added scripture readings and the Lord's Prayer to the meeting protocol.

That same year a 30 dozen case of eggs was sent to an orphanage in time for Easter with each member donating 21 eggs.

Many rules were instituted by these early club women, one of which concerned attendance. If a member missed three meetings In a row, she needed to submit a written excuse.

In February of 1932, three quilts made by club members were sent to a home in Council Bluffs. It cost the group 36¢ for insurance and postage to send the quilts through the U.S. postal system.

The club began to make yearly booklets in 1939, The Club motto, "What is best for us, always lies within our reach, so often overlooked." and the club song, "Blest Be The Tie That Binds" were part of every meeting.

The Club celebrated its 25th anniversary in 1941 with 21 members and their spouses present. The milestone celebration was held at the home of Amelia and William Kugel. Members who had been in the group for 25 years were recognized with a pin and badge.

In 1944 members began giving gifts to babies born to club members. The flower show was a big event in the summer months.

As the years progressed, recognition was given to members as they became 25 year members, and charter members assumed Honor Roll status.

Trips taken in the 1940s and 50s included: The Bily Clocks in Spillville, the state fish hatchery and the museum and greenhouse in Decorah, and the Villa Louis in Prairie du Chien, Wisconsin.

The club marked its 40th anniversary on November 24, 1956, with a steak dinner at the V & J cafe. In that same year the Grand Meadow Country Club made cancer gowns from white shirts. When the City of Postville celebrated John R. Mott Days in 1965, the group decorated a window and contributed to the general fund of the celebration.

When the club celebrated its 50th anniversary, several former members and charter members attended an open house at the Rekow home.

With the opening of Postville's Good Samaritan Center, members took turns serving refreshments at the center. In 1974 they made lap robes for the Center.

A typical Iowa blizzard canceled the group's 60th anniversary celebration. The historian's book noted that Rekows had no electricity from Friday until Sunday night.

In 1978 the Club made baby quilts with each member doing one block. The group also made tray favors for the local hospital.

Another quilt project was undertaken by the group in 1985 as they made a quilt for the Postville Fun Days.

Throughout the last ten years, the Grand Meadow Country Club has continued to give donations at holiday time to the Children's Square, USA at Council Bluffs and to many local causes.

The club dues were raised during the 1996 year, and will be raising again this year. A thought for the day is read at each meeting. "Life isn't how long you live, but how you make the journey," was read at a 1999 meeting.

The club members have also taken one summer monthly meeting to walk through the members' gardens.

A program is also presented at each meeting, and one especially memorable one was given by member Nancy Engelhardt when she showed slides of the early 1900 years.

Club trips continue to be a tradition with Grand Meadow Country Club with trips in recent years to Marquette/McGregor, Balltown, Guttenberg, "The Cabin in the Woods", Ion Exchange, the Natural Gait and Galena, Illinois.

Roll call over the past several years has been interesting with members bringing old or antique items from the past to share.

The Club also put together baskets of food products for shut-ins and also donated non-perishables and money to local food shelf areas and the school.

Club program material for the past year has been reading minutes of the early club years, including the wording used in writing them.

The history book reports, "We continue to meet each March at the home of Brenda Rekow as this is where it all started."

Although there are currently just seven members on the Club roster, they continued to enjoy their gatherings and are looking forward to celebrating the Grand Meadow Country Club's Centennial in 2016.

Congratulations to current members Lillian Schutte, Gwen Rekow, Nancy Engelhardt, Emily Heying, Karla Miene, Marge Stansberry and Brenda Rekow. Your willingness to serve as well as your dedication are an example for us all.

(Editor's Note: Much of the information for this article was gleaned from clippings belonging to club member, Nancy Engelhardt, which she inherited from her mother, long time club member, Helen Krambeer.) 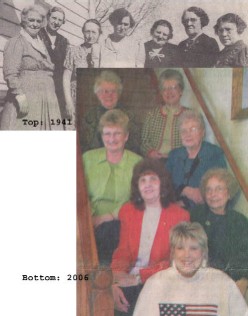 Larger versions of the photos