The February spotlight focuses on Katharine Isenbarger as the resident of the month at the Good Samaritan Center.

Born April 8, 1886 in Monona, the daughter of James and Sophia Ulrich, Katharine graduated from the Monona high school in 1904, and from Upper Iowa College in 1908, majoring in science. She later acquired her Masters Degree at the University of Chicago.

She began her teaching career in the high school in Oskaloosa and taught in Davenport, Little Rock, Arkansas and in Oak Park, Illinois, where she remained until her retirement in 1938.

In January of 1939, she was married to Jerome Isenbarger, who was also a science teacher in the Chicago school system and later was Dean of the Junior College in Evanston.

Both Mr. and Mrs. Isenbarger served two year terms as president of the Central Mathematics and Science teachers association, which covered seven states. They spent their retirement years at their home on the North side of Chicago.

Following her husband's death in May, 1969, Mrs. Isenbarger moved to Cedar Rapids and made her home with her sister* and husband.

She became a resident at the Good Samaritan Center in July of 1970.

Mrs. Isenbarger was a teacher of considerable note having been accorded several awards for her ability as a teacher and administrator, being a favorite with both pupils and teachers.

~Postville Herald, Wednesday, February 6, 1974 (Resident of the Month column)- the photo (below) accompanied the article. 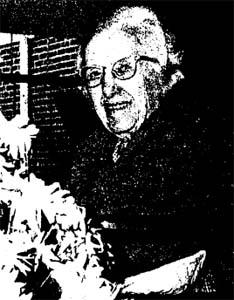