Oldest Woman in Iowa Celebrates Her Birthday
McGregor, Ia., Aug 14, 1909 - On Aug 19 Mrs. Ann Dickens, who lives with her daughter, Mrs. Larry Jennings, on a farm three miles north of McGregor, will celebrate her eighty-seventh birthday. On June 10 she celebrated the seventy-sixth anniversary of her arrival in Iowa. Indeed, it is believed that her term of residence ante-dates that of any other settlers by two years.

A member of the State Historical society said of her recently: "There is none other known to us who can lay claim to Mrs. Dickens' distinction."

When it is recalled that Iowa was first recognized officially as the home of the white men on June 1, 1833, the startling fact presents itself that there is yet living in the person of Mrs. Dickens one whose term of residence in Iowa, if we except ten days, has been as long as the actual existence of the state itself.

Prior to June, 1833, a number of settlements had been made on the eastern border of Iowa, notably at Dubuque, Burlington, Keokuk, Davenport, and McGregor. Their permanence, however, depended upon the friendship of their founders with the Indians. It was not until Black Hawk and his Sac and Fox followers were routed at the battle of Bad Ax in the summer of 1832, and as a punishment for their bad faith were compelled by the United States government to surrender forever all claim to a fifty mile strip of land west of the Mississippi, that actual settlement authorized by the government took place in Iowa, then a part of Michigan territory.

Early Settlers Come
No sooner had the news of the "Black Hawk Purchase" spread through Illinois, Indiana and Ohio than a crowd of settlers from those states, fired with the tales of the wonderful beauty and fertility of the land included in the Purchase strip, began to hurry by team and flat boat to the Mississippi. Many of them, though the land was not open to settlement until the first of June, hazarded getting across the river early in the spring and squatting on the land. The Indians complained of their coming and the government ordered Col. Zachary Taylor and a detachment of soldiers from Fort Crawford to go to the lead mines at Dubuque, where most of the settlers were landing, and drive them back east of the river. This was done and a military patrol of the west shore established to prevent their return. The soldiers had their hands full for the several months that intervened before the first of June, as many of the settlers resorted to all manner of schemes to outwit the troops and squat on the land before the appointed time.

On June 1, the last of the Sacs and Foxes quietly withdrew from the land, the soldiers went back to the fort and the eager throng of waiting settlers came pressing across the river at Dubuque and other points on the river, as fast as the few ferry flat boats could bring them. During the first week, Mrs. Dickens, then 11 years old, reached Jordan's Ferry, opposite the "Mines," with her mother and her stepfather, John Redmond.

The Redmonds Arrive.
They had left their home near Terre Haute, Ind., the winter before, and inspired by the stories of the beautiful country west of the Mississippi, told them by their neighbors, the Langworthy brothers, they had gone to Mineral Point, Wis., and waited there during the winter, in order that they might be among the first to get to Iowa, when the "Black Hawk Purchase" was opened up in June.

It was several days after the arrival of the family at the ferry before they could get across, as the only means of transportation was the one flat boat which was poled and oared across the river by "Old Man Jordan" and his crew of four. The crowds already on the east bank were fighting for the first right to be carried across in this. The Redmond family finally got aboard June 10 -- Captain Read embarked at the same time. The captain had won distinction in the Black Hawk war and was destined to become one of the founders of Clayton county and a prominent figure in the beginnings of northeastern Iowa.

Dr. Hill, the first physician to come to Dubuque, and, for some time after his arrival the only practitioner in Iowa, was also on the ferry. When a yoke of oxen and a large amount of freight were added to the load and the platform of boards, which was all that separated the passengers from the water, sank under their weight perilously near the level of the river, Mrs. Dickens remembers the fright of all on board as they started on their journey.

First Scenes at Dubuque.
A crowd of people were already on the shore at Dubuque when they landed, and with confused hurry were pitching tents, putting up temporary shacks, and digging furiously in the hills for lead. There were only two finished buildings: one was the house in which Julien Dubuque had lived, the other a log hotel where Widow Willoughby was attempting to feed and lodge the crowds that were daily coming. The hotel had only the ground for a floor, and, on this, Anne Redmond with her mother and many others of the women and children slept at night. A store consisting of a clapboard roof and rows of shelves nailed to the poles which held it up, had been opened near the hotel. Around this store the hotel, and the blacksmith shop where the men worked all night as well as all day; on the shore watching the new arrivals and on the hills where the men were digging for ore, Anne Redmond found many things of absorbing interest in the two weeks she remained at Dubuque with her mother. At the end of that itme her father returned from a trip of exploration to the north, and took them up to the cabin he had built on the Maquoketa. They lived there until 1836 when the report of the greater richness of the valley of the Turkey river led them to go farther into the wilderness. The second cabin was built near the proposed site of Millville, in Clayton county.

Married at 15.
Here, on May 27, at the [illegible] Anne Redmond was married to Edward G. Dickens by Judge Price. The [illegible] marriage north of the Turkey river which any record has been kept [illegible] of Berryanrive Stout and [illegible], a Winnebago girl known [illegible] Prairie Flower." As that ceremony was confirmed by Captain Read, consisited of the bride and groom joining hands and jumping several times back and forth across a canoe paddle, it is safe to accord to Mrs. Dickens the honor of being the first woman married in northeastern Iowa.

For some years after her marriage she lived in the woods with her husband, miles away from her parents and any neighbors. The only human beings she saw were the Winnebago Indians who, by permission of the government, were allowed to hunt along the Turkey. In describing her life during those years she says in substance: "The timber fairly teemed with panthers, bears, wolves, deer, elk, and all manner of wild game. We often could not sleep at night because of the fearful howling of the wolves and the cries of the wild cats. We always had plenty to eat, for no man with a gun needed to go hungry in those days. And of all the delicious food ever eaten by any one it was the meat we got of the woods and cooked over the open fire in our log cabin. Besides venison, elk, bear meat, and wild turkey and other small game, we had bass from the river and trout from the streams. The woods were full of wild fruits, and the honey barrel which stood in the corner was never empty. After the first year we had corn and potatoes from our little piece of breaking in the timber.

Corn Cracker at Last.
"At first we had to grind it ourselves by hand, but in the second year a "corn cracker" was started at Eagle Point and we carried our corn there in the fall to have it ground into meal. Whatever other supplies we needed the men bought when they took their raft laden with furs down the Turkey and the Mississippi to the "Mines" and brought back with them on the boat which they had taken along. During the first trip my husband made to Dubuque, I staid alone in our cabin in the wilderness with no other protector than our dog. My only visitor during the time was an old Winnebago Indian who made me a friendly call and presented me with some game he had killed.

Mrs. Dickens has been a continuous resident of Clayton county since she came to Millville with her parents in 1836. For the past forty years she has lived near McGregor. She has been the mother of twelve children, seven of whom are still living. Three of her sons served in the northern army during the civil war. One lost his life in a southern hospital, and because of his death in the service she has drawn a pension for many years.

Though Mrs. Dickens is so soon to celebrate her eighty-seventh birthday, she still enjoys reasonable amount of good health and her memory of the events of her younger days in Iowa remains remarkably clear and accurate. She is immensely proud of her long life on [illegible] and devoutly loyal to the state [illegible] she saw born and has watched grow and develop for more than three-quarters of a century.

"There never was, there never will be again such a frontier as Iowa. Indeed it is the 'beautiful land' and we who came first know best how true that is" she says with a thrill in her voice and an impulsive gesture of her aged hands as she sits and rocks and tells her story, the story that she alone still lives to tell. 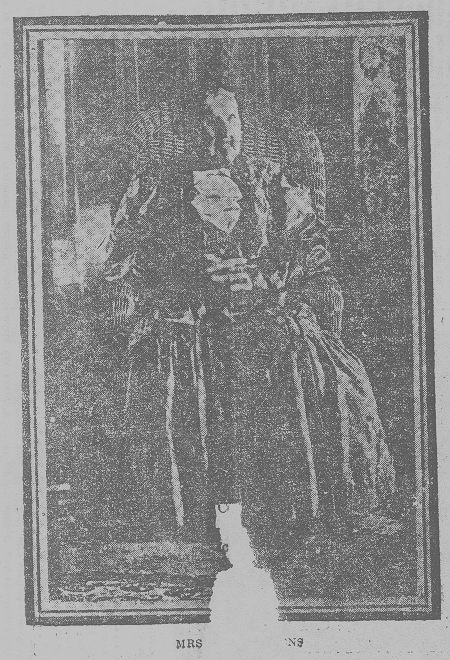